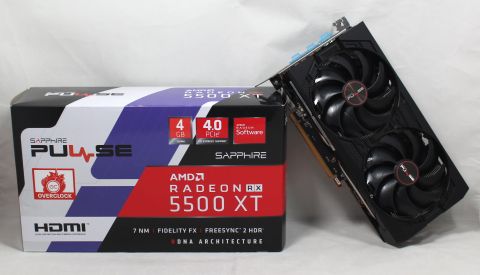 When compared to the Nvidia’s current competing cards, performance of the 4GB RX 5500 XT lands between a GTX 1650 Super and GTX 1660, when VRAM doesn’t get in the way. In titles where it does, the AMD card then tends to trade blows with the GTX 1650 Super and sometimes even the GTX 1650. The moral of the story here? Either variant is a welcome addition to the market, but If you intend to play modern AAA titles at Ultra settings, go with the 8GB variant to get the most out of your new GPU.

After a much-delayed and anticipated release, AMD’s RX 5500 XT is a compelling product and gives users more than one good choice in the sub-$200 category for 1080p gaming. The RX 5500 XT is a good replacement card for the aged Polaris architecture and RX 4xx/5xx series of cards. Navi’s 7nm process and other architectural improvements bring it in line with its Nvidia-based competition. As we saw in the performance graphs, there’s still a large gap between the RX 5500 XT and the RX 5700. With plenty of space in both performance and price to slide in another SKU, we could see an RX 5600 to compete with the GTX 1660 Super and GTX 1660 Ti.

When we look at pricing, Nvidia’s GTX 1650 Super can be found for as low as $160 dollars on Newegg while the faster GTX 1660 is $199-plus. If gaming at 1080p running medium settings, the 4GB 5500 XT is a competitor at the lower price point. The true view of value here is going to come down to card partner pricing and how third-party RX 5500 XT designs. However, if running Ultra settings is your goal, the GTX 1660 is the same price as the 8GB variant and is stiff competition. A sale could sway the decision either way, all other things equal.

Prev Page Software: Sapphire Trixx
35 Comments Comment from the forums
Be In the Know