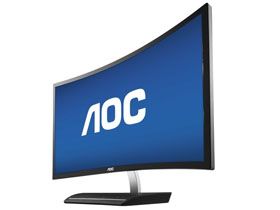 The C2783FQ is somewhat different from the monitors in our database, so we decided to include only VA panels in today’s group. Two of them, AOC’s C3583FQ and Acer’s Z35, are fast-refresh gaming screens, but the rest are firmly in the general use category. Rounding out the chart are the HP Envy 34c, Philips BDM4065UC, and BenQ VZ2470. Contrast and black levels are the theme here. All the monitors are capable of at least double the contrast of their IPS or TN counterparts.

The C2783FQ isn’t the brightest monitor out there, but its measured max white level of 250.3758cd/m2 is more than adequate for office use. The two gaming screens offer output north of 300cd/m2, but the rest aren’t much brighter than our review subject.

Of course the top story is black level, and all of these monitors render rich, deep blacks, very similar to what you’d see from a quality HDTV. Even the last-place C3583FQ is far darker than any IPS screen we’ve measured.

Resulting contrast approaches 3000:1 and puts the C2783FQ mid-pack. It’s unlikely we’ll see anything but an OLED break the Philips record of over 6000:1 max contrast.

88.1003cd/m2 is a little bright for dark room use. We’d prefer something closer to 50cd/m2. But if you have a dim light on in the background, eye fatigue can be reduced significantly. That brighter backlight means a last place finish in the black level test, but the C2783FQ remains mid-pack in the sequential contrast comparison. As we'd expect from a modern display, contrast stays consistent throughout the backlight’s range.

Calibration seems to raise the black level ever so slightly. It’s not a difference you can see, but it is measurable. That drops the sequential contrast down to just below 2000:1. Part of the reduction comes from lowering the contrast slider to fix a slight clipping issue in the 100% brightness step. The extra color accuracy is worth a small loss in performance. Fortunately we didn’t have to lament the sacrifice for long. Check out the ANSI result below.

Rarely does any monitor’s ANSI result exceed its sequential one. The uniformity of our C2783FQ is top shelf, as is the grid polarizer, which allows no light bleed between the white and black squares of our checkerboard pattern. Those black squares actually measure a tad darker than the full-field pattern, which almost never happens. This means actual content will have deep convincing blacks loaded with detail and bright, crisp white highlights. It truly is one of the best pictures we’ve seen to date.

Prev Page OSD Setup & Calibration Next Page Grayscale, Gamma & Color
12 Comments Comment from the forums
Be In the Know