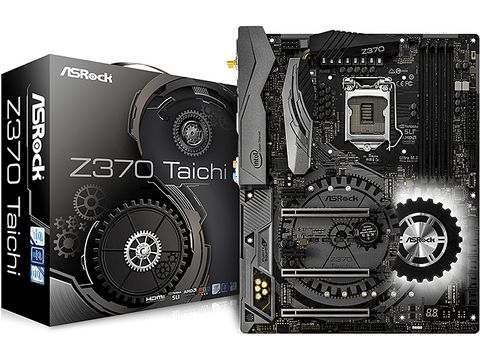 Now that we have two boards to compare to today’s sample, we’re ready to start looking at averages and de-emphasize the older platforms that will be dropped from the charts of our next Z370 review.

Synthetic benchmarks continue to be a great way to look for performance problems when evaluating hardware, including snuck-in overclocks and undiagnosed configuration errors. All three Z370 boards would perform identically in a perfect world, but we know that each board has its own BCLK violation (ranging from 100 to 100.85 MHz) as well as its own advanced memory timings.

I’m ready to declare all three Z370 boards ‘close enough’ across our synthetics to make this a ‘fair enough’ comparison, yet I won’t forget that the Z370 Taichi’s default BCLK is slightly higher than MSI’s, which is slightly higher than Gigabyte’s, as shown through miniscule differences in Sandra Arithmetic. Interestingly, the Z370 Taichi also has the lowest Sandra Memory Bandwidth reading.

The Z370 Taichi fell slightly behind at our lower Ashes test setting, and surged slightly ahead at its higher setting. Though the most common reason for this variation would be differences in drivers and driver control applications, we leave o-nboard device driver decisions to manufacturer selection.

The Z370 Godlike Gaming’s Nahimic audio solution is Talos-compatible, but the software also has an FPS toll when enabled. A look back at that board’s review reveals higher frame rates with the software disabled.

Lower times mean better performance in timed applications, and the Z370 Taichi has as many minor recoveries as minor stumbles. It’s on-par overall with its closest competitors.

The Z370 Taichi has a heat problem at CPU defaults, and that’s another factor that could limit overclocking. The additional heat corresponds to higher full-load current draw in the power chart, making this the first Coffee Lake board to enter Skylake-X territory.

The Z370 Taichi’s average performance level falls between that of the Z370 Aorus Gaming 7 and Z370 Godlike Gaming, but high current draw makes us wish they’d have refined the board a little more before casting it into this cold cruel world.

The Z370 Taichi actually has several overclocking problems, and though none of these are large, all have a slight impact on its competitiveness. We even had the system crash after pushing its BCLK past 211 MHz after setting a mere 400 MHz FCLK baseline.

Memory performance is the point of memory overclocking, and the Z370 Taichi offers a good representation of this RAM’s capabilities at its rated DDR4-3866 when in dual channel mode (with four DIMMs enabling the CPU’s preferred four-bank configuration). Unfortunately, it falls behind the superb overclocks of competing samples.

The Z370 Taichi is the cheapest Z370 board we’ve tested yet, so its performance-per-dollar appears superb. And if we were to attempt to offset that cost based on features, it would still look good, as it comes with a Wi-Fi controller that the second-cheapest Z370 Aorus Gaming 7 lacks.

But the value discussion needs to jump a few hurdles before it can cross that finish line. Heat problems are the first mark against the Taichi, followed by excessive power consumption and overclocking weaknesses. This combination of factors almost makes it look like the power section was lifted from the Z270 Taichi, which was optimized for four-core rather than six-core CPUs. And while some of these issues might be minimized in future firmware revisions, we’re not ready to label this one “fully acceptable” to qualify for our Approved award. And if it can’t get over that hurdle, the value-oriented “Recommended” award would require a vaulting pole. We didn’t find one in the installation kit.

Tom's hardware has both site-wide and category specific rules that help us to produce quality content across a wide product range. The site-wide rule is that we address defects with the manufacturer, and try to keep readers informed of the changes if any of those products have already entered the market. But firmware problems? We're not developers. Additionally, because a continuous series of firmware coverage would prevent us from publishing new reviews, we tell motherboard firms that they need to get it right the first time. Thus, the two rules for motherboard reviews are that we use "final" firmware whenever it's available, and we don't do retests.

Occasionally a firm will send a board in advance while finalizing a firmware update and ask us to delay the review--since shipping takes time, this too is acceptable. ASRock didn't do that. Instead, it found and fixed a firmware flaw after asking us to rush a review. In the interest of providing our readers with complete coverage, I'm violating those two motherboard review rules in the spirit of the site-wide rule regarding defects.

Beta firmware L1.16 addresses voltage "droop compensation," which is a setting ASRock calls CPU Load-Line Calibration. Where P1.10 firmware had allowed a Core Voltage setting of 1.30V to drop to around 1.25V under load using Level 1 compensation, version L1.16 allows it to climb slightly above 1.30V at the same settings. We used 1.295V to keep temperatures under control, and successfully overclocked the CPU to 4842 MHz at "auto" base clock, which in this case was 100.88 MHz. Pushing to 101 MHz caused the CPU to drop one thread under Prime95 small-FFTs, which is an AVX-heavy load, leaving the official stability limit at 4842 rather than 4848 MHz.

The BCLK was also a little more forgiving, allowing the board to reach 222 MHz rather than its previous 211 MHz. Few overclockers will likely care once it exceeds 200 MHz.

We said we're not beta testers? We still had to confirm consistent performance under the beta firmware. The numbers shifted around a little, but not enough to change the board's standing in any significant way. One peculiarity was that the retested Z370 Taichi increased its score at our lower F1 2015 setting, but dropped it a little at our higher F1 2015 setting.

All of this retesting points towards one conclusion: Had ASRock fixed its firmware before our review, the Z370 Taichi would have won an award. But I'm not going to violate yet another rule by applying that award retroactively, as doing this wouldn't be fair to competitors with likewise improved firmware. We're not beta testers and we don't do retakes. I'll just keep telling myself that until it's true again.