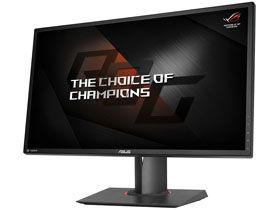 With more gaming monitors coming to market with G-Sync and FreeSync, manufacturers have to find some way to set themselves apart from the competition. Since adaptive refresh guarantees freedom from annoying frame tears, regardless of price or technology, there aren’t too many features left to add or delete.

The PG248Q, as part of the ROG product line, represents the “kitchen-sink” approach. This monitor has absolutely every possible feature a gamer could want. The principal one, G-Sync, is a must for premium systems. While FreeSync offers the same net benefit, it takes a bit more digging to find the panels that can hit a 30Hz lower limit. Many stop the fun at 40Hz, which can be an issue for users of less expensive video cards.

This monitor, however, is about upper limits. By adding a 180Hz capability, Asus has positioned this display as a future-ready product. Note that we’re not using the term “future proof” since, in reality, there’s no such thing. Our G-Sync system performs extremely well thanks to its GeForce GTX Titan X board. While an SLI setup would pump out higher framerates, our tower comes pretty close to what most games will be able to serve up at the limit.

So did we actually see 180 on the FPS counter? No, not during actual gameplay. Tomb Raider and Far Cry 4 topped out around 120 FPS at max detail levels. Dropping the settings took us up to 140 FPS or so but not beyond. Why would you want a 180Hz monitor, then? For the future of course.

A gaming display is an investment for sure. Premium screens like the PG248Q aren’t cheap and monitors are expected to outlast multiple PC upgrades. That is where this product fits in. Hardcore gamers will be replacing hardware on a regular basis, but they don’t necessarily want to shop for a new panel every six months.

One last word about the benchmarks before we wind this up. We were a little disappointed with the PG248Q’s out-of-box accuracy. At this price level, a monitor should not require calibration. Our initial measurements showed this one did. The end result, though, was a stunning picture that hit all the marks with regards to grayscale, gamma, and color. It just took some tweaks to get there. If you decide to purchase this display, we strongly suggest using our recommended settings on page two. Changes to the RGB and contrast sliders plus the proper gamma preset will make a big difference.

In the end, though, once the games come out, those issues barely matter. The speed and responsiveness of the PG248Q is pretty much unparalleled. We spent many hours playing just for the fantastic suspension of disbelief it enabled. And that, in a phrase, is why you should buy this display. Yes, it’s FHD, and yes, it’s TN, but that won’t matter once you use it. With a few flaws, we can’t quite award it an Editor’s Choice, but it easily earns the Tom’s Editor Recommended title.