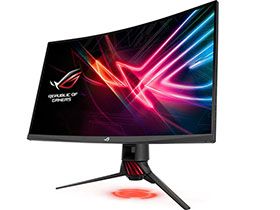 We like the XG32V; it offers a large, bright screen with excellent gaming performance, cool styling, and solid build quality for a reasonable price. But we missed a true sRGB color and 2.2 gamma option for more accurate with most of today’s video and gaming content. Still, it’s an impressive use of VA technology, with 3000:1 contrast and image quality superior to any IPS or TN monitor. Thanks to a 144Hz refresh rate and FreeSync, gaming is a pleasure. If you don’t mind the extra color, it makes for a compelling choice.

Curved monitors have created a solid niche for themselves in today’s computer display market. They work well for general tasks, but gaming is where the really shine. The immersive effect they provide just can’t be replicated with a flat screen. Most of these panels come in a 21:9 ultra-wide aspect ratio, but a few models stick with the more-common 16:9 shape. For some users, this makes them more versatile.

Asus’ Republic of Gamers line is all about gameplay. The hardware is designed for no-holds-barred (and sometimes price-no-object) performance. We’ve looked at many of the line's high-refresh-rate monitors and found that they generally live up to the hype. It was a surprise, then, when we learned Asus would be adding 16:9 curved screens to the series. The first of those we’re looking at is the ROG Strix XG32V. It’s a 31.5” VA panel with QHD (2440x1400) resolution, and 1800R curvature, DCI-P3 color support, and a 144Hz refresh rate with FreeSync (AMD's screen-smoothing variable refresh tech).

Asus has endowed the XG32V with several interesting features. First up is the 16:9 1800R VA panel, which is somewhat unusual among gaming monitors. Typically, these screens are either large and flat, or curved and wide. Here, we have a relatively subtle 1800mm radius curve, coupled with a traditional 16:9 aspect ratio. Thanks to a 31.5” diagonal size, the monitor has no problem filling the viewer’s peripheral vision, and the extra pixel height helps block out surrounding distractions even more effectively. This monitor might be considered a good alternative to the 38” ultra-wide behemoths that not only take up a lot of desktop space, while demanding ultra-premium prices.

Speed comes in the form of a 144Hz refresh rate, with variable-refresh FreeSync operation down to 48Hz. The wide 96Hz refresh range is accompanied by Low Framerate Compensation, which doubles frames when the action drops below 48fps. Basically, that means your games should never suffer from screen tearing, even at extremely low frame rates. Of course, so long as you have a reasonably powerful graphics card, you won’t have much to worry about there since there are fewer pixels to move about. The QHD resolution here is a performance sweet spot. Premium video cards can top 100fps with ease while budget-oriented boards can maintain 60fps. You give up a bit of pixel density over a 27” monitor with the same resolution, but the 93ppi here will still render fine detail with clarity.

For the style-conscious, Asus has added Aura Sync. This feature manipulates the LED lighting on the base and back of the monitor with various colors and effects. Aura Sync means you can match the light show on your screen with those in your case--provided you have a compatible Asus motherboard. If you’re looking for a theatrical experience to pair with your favorite game, Aura Sync has you covered.

The final piece of the feature puzzle is Asus' claim of 125% sRGB color. That sounds suspiciously like a DCI-P3 color gamut to us. We’ll be exploring that one during the testing phase. The Strix XG32V looks impressive both on paper and in its physical presence. Let’s take a look.

The Strix XG32V is a large monitor and it comes in an appropriately-sized box with ample protection. Our sample arrived in perfect shape, despite a few dents in the carton. The upright is permanently attached to the panel, thanks in part to the integrated lighting system. But VESA mount users will have to look elsewhere for a gaming monitor. The base attaches with a single captive bolt, then you snap on the lighting cover with one of its three lenses (more on that below).

Asus includes HDMI, DisplayPort, and USB 3.0 cables in the box. The power supply is external and comes in its own small box that looks a lot like an Apple TV. You also get a printed quick-start guide and a CD with Aura Sync software and the user manual.

Once the XG32V is up and running, your eyes will be immediately drawn to the lighting effect coming from the base. Asus has included three lenses that project two different logos, or simply a soft glow if you prefer. The effect is controlled by both the OSD and Aura Sync software. The latter can be used to coordinate the light show between the monitor and other supported ROG hardware like case lighting or RAM sticks. LEDs are also found in back, around the upright’s attachment point. That, coupled with the spaceship-plating style we’ve seen in other ROG monitors, sets Asus apart from other brands. You’ll know immediately what kind of monitor you’re looking at.

The curve radius is 1800mm, which is relatively subtle compared to other gaming screens. But it's appropriate for the 16:9 aspect ratio in that it provides a nice wrap-around effect without image distortion. Pixel density is a tad low at this size, but clarity is not an issue. The picture is sharp and clear thanks to an optically-perfect anti-glare layer.

The bezel is very narrow at the top and sides, but a little wider at the bottom. Controls are found around back on the lower-right, and consist of four large buttons and a joystick. OSD navigation is simple and intuitive, though the power key feels the same as the other controls, making it a little too easy to turn off the XG32V inadvertently.

In the rear-panel photo, you can’t see the input panel because it’s hidden by a snap-on cover, which completes the chassis’ shape. Cables exit through a small hole and can be threaded through the upright for tidiness. Connections consist of a single HDMI 2.0 port, two v1.2 DisplayPorts (one is mini), a 3.5mm analog audio output, and two USB 3.0 downstream ports with one upstream. You’ll need to connect the USB cable to your PC to make Aura Sync work.

Next Page OSD Setup, GamePlus, & Calibration
9 Comments Comment from the forums
Be In the Know