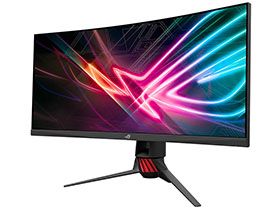 It may not be an HDR panel, but if you’ve been considering a curved ultra-wide, we've seen few better choices than the VA-based XG35V. Class-leading contrast and great color pair up with FreeSync and a 100Hz peak refresh rate in a premium-priced but well-executed display.

When it comes to flat monitors, we have found that for most users, a 27” screen with a QHD native resolution often represents the best balance between pixel density and performance. At 109ppi, it offers plenty of detail, while presenting a reasonable load for a mid-priced video card to drive.

But curved displays present a different calculus. Curved screens come in a large variety of sizes and resolutions, with maximum refresh rates running anywhere from 60Hz to 165Hz. We’ve test-driven many different panels and today, we’ll be looking at a new model from the Asus Republic of Gamers line, the Strix XG35VQ, which presents an interesting spec mix of its own.

With 3440x1440 pixels of native resolution in a 35” 21:9 format, it delivers 107ppi. Also, you can drive it up to its 100Hz refresh maximum without breaking your video-card budget. To that, it adds accurate color and high contrast courtesy of a quality vertical-alignment (VA) panel. Let’s take a look.

We’ve looked at many different gaming monitors since high refresh rates and adaptive sync emerged a few years ago. Those two features helped set gaming displays decisively apart from their business-class counterparts. Today, the rift is wider than ever, with curved ultra-wide screens that come in generous sizes. But the one thing that still remains somewhat rare is the inclusion of VA technology in the panel.

Regardless of whether the screen is marketed for work or play, we always prefer the higher contrast that a VA display delivers. It’s not a trifling amount. The least-capable VA panels easily double the dynamic range of the best IPS and TN screens.

The Strix XG35VQ is one such display. It sports height and pixel density equivalent to that theoretical 27” flat panel we mentioned earlier. It simply expands to the sides to reach 3440 pixels, and it wraps the action around you with a curvy 1800mm radius. Speed and smoothness come thanks to AMD FreeSync support and a native 100Hz refresh rate. And there’s a bonus not commonly found in AMD FreeSync-compatible panels: blur reduction. Asus calls it "ELMB," for Extra Low Motion Blur. (As we know, the "Ultra" adjective in this context is already taken by Nvidia.)

The VA panel delivers contrast in excess of 2000:1, as well as super-accurate color, as confirmed by our tests. FreeSync operates in the somewhat narrow range of 48Hz to 100Hz, which takes Low Framerate Compensation off the table. But the resolution takes some of the burden off your graphics hardware. You won’t need a thousand-dollar video card to drive the XG35VQ to its optimal performance happy place.

Asus never skimps on packaging, and you can rest assured that an XG35VQ shipped to your door will arrive undamaged unless someone is overtly violent with the carton. Like with all of the ROG displays we’ve reviewed of late, the upright is permanently attached to the panel, so all you need to do is bolt on the base and attach one of the four Light In Motion lenses. (More on those in a moment.) The cable bundle includes HDMI and DisplayPort, along with USB 3.0. The external power supply is Asus’ familiar external brick that looks like an Apple TV. Not only is it spiffy-looking, but it also keeps the display running cool.

The first thing you’ll notice is the XG35VQ’s 1800mm-radius curvature. That measure is the tightest number currently available in any screen size. It produces an obvious wraparound effect that's perfect for first-person shooters and other perspective-type games. For those concerned about image distortion in applications like spreadsheets or word processors, no need to worry: There isn’t any. It’s not a given that a monitor this tightly curved will create a barrel effect. We had no problem performing business tasks on this screen.

In a sop to gamer LED bling, this panel features some built-in lighting effects that project onto the desktop. The lighting emits from the base, and an image is imposed on the desktop from LEDs in the upright. Four different lenses come in the box, and they easily snap in place as your mood changes. You adjust the color and brightness of the projection in the OSD, or you can turn it off altogether. Also, a multi-colored glow comes from a ring around the upright’s attachment point. That, too, can show in different colors, and you can designate a flashing or breathing effect. Using the Asus Aura Sync software, you can tie the lighting effects to gaming action, once you install the included software and attach a supplemental USB cable between the XG35VQ and your PC.

The styling is exactly what we’ve seen from all Asus ROG monitors over the past year or so. Thinly molded lines and details give the distinct impression of spaceship hull plating. (Think Battlestar Galactica, only less chunky.) High-quality black plastic covers everything in a smooth curve with nary a straight line in sight. It’s a tried-and-true design that continues to appeal to enthusiasts. The screen has an anti-glare layer that is flush-mounted with a thin 9mm bezel around the top and sides, plus a 25mm trim strip across the bottom.

Control comes from four buttons and Asus’ excellently designed OSD joystick. It can be used for nearly all functions by simply pressing it to engage the menu. It and all the keys click satisfyingly. Our only nitpick is that the power button feels the same as the others, making it a little too easy to turn off the monitor accidentally.

The stand is rock-solid, with an all-metal base and a firm movement feel. Rotating this screen to portrait mode is not possible (for obvious reasons), but you do get adjustments for just under 4” of height (10cm), 50° of swivel in each direction, 20° of back tilt, and 5° of forward tilt. The monitor has no built-in speakers, and ventilation is handled by a thin grille that follows one of the contour lines in back. We felt no excessive heat coming from the XG35VQ after hours of testing and use.

The input panel offers two HDMI ports, one of which supports HDMI version 2.0 with HDCP 2.2. The other is HDMI 1.4, and you get a single DisplayPort input, as well. USB is version 3.0 and consists of one upstream and two downstream ports. Audio comes from a headphone output that you can also connect to powered speakers. Once you’ve made your connections, a cover snaps in place to hide the cables.