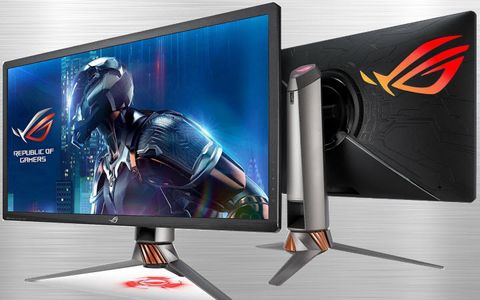 Aside from cost, the Asus ROG Swift PG27U has no flaws of consequence. It’s extremely capable for gaming, video, color-critical work and general tasks. And once you’ve experienced games at Ultra HD resolution and 144Hz, it’s hard to imagine playing any other way.

Ask 10 users what constitutes the ultimate gaming monitor and you’ll likely get 10 different answers. A few common threads will emerge though. There can never be too much resolution, and there’s no such thing as a refresh rate that’s too high.

We have reviewed many Ultra HD gaming displays, but none have been able to deliver frame rates past 60Hz – until now. Asus’ new ROG Swift PG27 is a 27-inch IPS panel with a 3840 x 2160 resolution, 144Hz refresh rate with overclock, G-Sync, HDR10, DCI-P3 color and true 1,000-nit brightness capability.

We’ll lay it all out right up front. This monitor will reduce your net worth by $2,000. But after spending many hours testing and gaming, we think it’s worth every penny.

If you’ve gotten over the sticker shock long enough to read the specs table, then you can see why the PG27UQ is so expensive. It’s only the second HDR screen we’ve seen with a full-array backlight. Like the Dell UP2718Q, it sports 384 independently addressable zones and can hit that magic 1,000-nit brightness level. It also features over 90 percent of the DCI-P3 color space thanks to a quantum-dot film and will run at 144Hz if you engage overclock. There’s a caveat there that we’ll explain in a moment, but the panel’s native refresh rate is 120Hz--not too shabby.

To properly drive this display, you’ll need a GeForce GTX 1080 Ti graphics card and the latest drivers to enable not only the fast refresh but HDR10 support. You’ll also need the Windows 10 update from October 2017 to enable HDR. Better yet, get the April 2018 update to add an HDR brightness slider to the Control Panel. This is the first screen we’ve seen that utilizes the bandwidth capabilities of DisplayPort 1.4. Of course, G-Sync is the tear-eliminating tech of choice and surprisingly, there is no ULMB (ultra low motion blur). The panel will also accept 10-bit signals though its native bit-depth is still 8-bits with Frame Rate Conversion (FRC).

To cement its status as a premium monitor, the PG27UQ includes a factory-certified calibration. And we can confirm that it not only meets its claimed specs, but that it’s also one of the most accurate HDR displays we’ve tested. There is a lot to see here, so let’s take a look.

Like all the products in Asus’ ROG line, the PG27UQ includes some nice extras. Multiple lenses for the base’s lighting effect project different patterns onto your desktop, and the styling lets you know instantly who makes this monitor.

The input pack is typical of a G-Sync monitor. You get one each of DisplayPort 1.4 and HDMI 2.0. Both include HDCP 2.2 content protection. Fast refresh is only possible through DisplayPort, and HDMI tops out at 60Hz.

The monitor also comes with a high-quality cable and an external power supply. Despite that, the panel has an internal fan that is in operation most of the time. If you have a completely silent PC and a dead silent room, you might hear it if you sit very close. With even the slightest ambient noise present though, the fan is a non-factor.

No tools are required for assembly. Simply snap on your lens of choice to the base and attach it to the already-in-place upright. The hardware is quite solid and features exceptional build quality.

From the front, you’ll never guess the PG27UQ is different from any other Asus ROG monitor. The bezel is fairly wide at 20mm on the top and bottom and 16mm on the sides. The anti-glare layer is set back a bit and rejects reflections effectively without causing resolution-robbing grain in the image. The picture is super-clear, stunning in fact, thanks to a tight 163ppi pixel density and the amazing contrast possible when the Variable Backlight feature is on (more on that on page four).

You control the on-screen display (OSD) via three keys and a joystick, which brings up the full OSD if pressed. The fourth button in the photo is a power toggle, and yes, you might push it accidentally sometimes. Here’s a suggestion to Asus and other vendors taking this approach: provide an on-screen confirmation so the user must press the power key a second time to turn off the monitor. Many projectors do this, and it makes sense.

Styling is slightly subdued when compared to other ROG screens, but molded textures are there along with some nice lighting effects. The base projects a pattern onto your desktop, and there is an ROG logo around back that is also backlit. You can control the effects in the OSD and even sync them to other ROG hardware components. There are many options that change colors and brightness with breathing and flashing accents. Or, you can turn the whole thing off if you wish. Meanwhile, the power LED light glows white in normal mode and red when G-Sync is working.

Stand adjustments are firm and precise and include 4.7” inches of height, 45° swivel in each direction, 25° back tilt and 5° forward. You also get a 90° portrait mode.