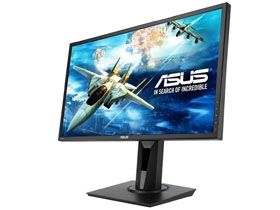 For less than two-hundred bucks, the Asus VG245H is pretty much in a class by itself. While that probably won’t be the case for long, this monitor makes a super-attractive choice for buyers on a budget. It offers all the build quality and features of more-expensive displays while only giving up refresh rate to the competition. If you have a low to mid-grade system, it’s an ideal match. Highly Recommended.

We cover a lot of cool new display technology, but regardless of how important or significant they are, the principal subject we see in reader discussions is price and value. The gaming monitor category is especially rife with expensive displays thanks to customer demands for things like high refresh rates, greater pixel density, IPS panels, and, of course, adaptive refresh.

We all know about the price divide between Nvidia’s G-Sync and AMD’s FreeSync. The latter is found more commonly in value-oriented displays, while the former has become the norm for premium products. Today we’re checking out a new value-leader in the 24" category: the Asus VG245H.

The VG245H represents something of a price breakthrough among 24" gaming screens. It’s the first one we’ve seen from a major manufacturer that cracks the $200 mark. And it doesn’t cut too many corners to achieve a competitive price. The panel is a TN part, which probably comes as no surprise, but it offers 8-bit color without FRC and a white LED backlight that’s flicker free. Resolution is 1920x1080, which means a reasonable pixel-density of 92ppi.

In addition to FreeSync, which operates over HDMI here, the refresh rate tops out at 75Hz. With much of the competition offering 144Hz, this is the only significant difference between the VG245H and other 24" gaming monitors. Adaptive sync works over a range of 40-75Hz, which means Low Framerate Compensation (LFC) is not possible. For that, the max rate must be at least 2.5X the minimum.

The remaining features are pretty much the same as what we found on the more expensive PG248Q. You get the same GameVisual picture modes, GamePlus, a slick OSD joystick for easy setup, and four memory slots to save your personalized configurations. For just under $200, this looks like a great package. Let’s take a closer look.

To extract the VG245H from its carton, you’ll have to slide the entire package out like a drawer. There are two large foam blocks keeping everything secure. Assembly consists of attaching the base to the upright with a captive bolt.

Included cables are HDMI, VGA, analog audio, and a tiny external power supply. You also get a quick start guide and warranty card. The full User Guide can be downloaded from Asus’ website.

The VG245H presents a trim appearance with a slim 13mm bezel that’s nearly flush with the anti-glare layer. While it’s not especially narrow, the tight mounting style means you’ll barely notice the division between screens in a multi-monitor setup. That precision is further aided by an alignment guide available in the GamePlus menu. The front of the screen doesn’t pick up stray reflections easily and provides a nice sharp image free of grain or other artifacts.

Controls are around back of the lower-right corner and consist of four buttons and a tiny joystick. It’s the same arrangement you’ll find on Asus’ premium screens, and it makes menu navigation super easy. There are no corners cut here as the keys click with a firm feel and positive response.

The stand offers tilt (38°), swivel (90° in each direction), height (130mm), and a portrait mode. Movements are just as high quality as the more expensive ROG PG248Q we just reviewed. Additionally, the height adjustment offers detents, so you can easily find your preferred position when the monitor is moved.

On the back you’ll find a bit of Asus’ sci-fi-tech styling with subtle lines molded into the plastic and a few interesting angles framing the input panel. The lines hide small grills which provide ventilation and a place for the stereo speakers. They play reasonably loud with minimal distortion, but their frequencies are restricted to the upper-midrange. Removing four screws detaches the upright and reveals a 100mm VESA mount.

The input panel is a first for us: a FreeSync monitor without DisplayPort. Adaptive refresh works over either HDMI input, and you’ll need to be sure to update AMD Catalyst if you happen to be running an older version like we were. There's also an analog audio input and a headphone output.