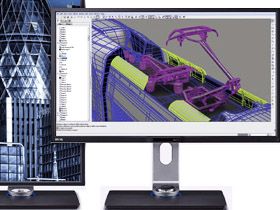 Although we’ve reviewed a fair number of gaming-oriented monitors lately, the bulk of our coverage over the past 18 months revolved around 27-inch QHD displays. They represent the majority of new introductions from all major manufacturers, and even some lesser-known ones. Thanks largely to panel parts from LG Display, the 27-inch IPS monitor with QHD resolution is fast becoming a popular choice for those looking to upgrade from their 24-inch FHD screens. Even though prices are still stuck around the $600 mark, there is no question that enthusiasts are buying them.

The only complaint we’ve registered along the way involves font size. With a pixel density of 109 ppi, text in most Windows applications becomes pretty small. And the older the user, the more difficult it becomes to read at normal viewing distances. BenQ now offers a neat and obvious solution to the problem. If Windows' scaling doesn’t satisfy you, then simply increase the screen size. Today we’re looking at the brand-new BL3200PT, a 32-inch monitor with a 16:9 aspect ratio and a density of 92 pixels per inch.

A little over a year ago, we reviewed two screens (HP ZR30w Versus DoubleSight DS-309W, 30-inch Monitors, Tested) that offered a 16:10 aspect ratio in a 30-inch form factor. They were definitely a step in the right direction. The HP has since been discontinued, but you can still find the DoubleSight for around $1000. And no other companies have introduced similar displays since then.

We feel this represents a screen-size sweet spot. That 92 ppi number should look familiar to you because it’s the same pixel density as a 24-inch FHD screen, which is what’s sitting on a majority of desktops right now. So who wouldn’t want the same text and object size they’re accustomed to, but almost double the screen area? We’re going from 246 to 437 square inches. Now that’s significant!

Peeking under the BL3200PT’s hood, we find a new panel technology, AMVA, which stands for Advanced Multi-domain Vertical Alignment. In simple terms, we’re looking at a slightly different pixel structure than our old friends TN and IPS. Its goal is to maintain the high contrast and fast response time of TN panels, while incorporating IPS’ superior off-axis performance. Early examples had their share of color shift issues, but the latest generation proves to be a huge step forward.

The BL3200PT employs a panel from AU Optronics that is the first of its type we’ve seen in a mainstream product. The backlight is W-LED, which currently limits it to an sRGB color gamut. That backlight, by the way, does not use pulse-width modulation like a majority of today's monitors. It’s part of BenQ’s Zero Flicker initiative, dedicated to reducing eye fatigue. We saw the same thing on the XL2720Z and RL2460HT. Monitors using PWM don’t necessarily have visible flicker, but after a few hours of use, some folks report discomfort. By controlling brightness at the pixel level and running the backlight with constant current, that source of potential eyestrain is eliminated.

Of particular interest is the panel’s native 10-bit color depth. This monitor does not incorporate frame rate conversion and can accept a 10-bit signal through its DisplayPort and DVI inputs. Of course, to take full advantage, you’ll need a 10-bit-capable graphics board and content encoded with the extra color information.

Needless to say, the BL3200PT makes quite a physical statement even before you turn it on. Does its performance live up to the promise? Let’s take a look.

Next Page Packaging, Physical Layout and Accessories
Topics
BenQ
Displays
Monitors
30 Comments Comment from the forums
Be In the Know