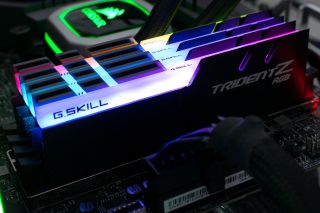 The secret to building an optimal computer system is the correct selection of its components. Careful selection not only ensures that all your components play nice together, but it also helps avoid bottlenecks that hinder performance and impact the user experience.

It goes without saying that memory is often one of the less-thought-about components. You could just purchase the most expensive memory kit, or the cheapest, but that's not always the best route. There are a plethora of memory kits on the market with different capacities, speeds, and timings. Choosing the right one can be a bit overwhelming for the first-time computer builder, or even for some of the more seasoned veterans.

Processor manufacturers, whether it be AMD or Intel, always list a processor’s supported memory speed as a guideline for the best plug-n-play experience. In the case of the 9th-generation Intel Core processors, aka Coffee Lake Refresh, Intel touts support for memory modules with speeds up to 2,666 MHz in a dual-channel configuration. Although Intel doesn't explicitly support memory speeds above DDR4-2666, the majority of Coffee Lake Refresh processors can easily handle faster memory.

Over the last couple of years, memory overclocking has become mainstream and easy. Memory manufacturers have smashed the speed limits for DDR4 memory repeatedly. Ironically, Intel itself developed the Extreme Memory Profile (XMP) standard to help consumers overclock their high-speed memory kits without much hassle.

Today we're taking a closer look at how overclocking your RAM above the recommended settings impacts performance on Intel's Z390 platform with a Coffee Lake Refresh processor, then we'll circle back and examine if that extra performance is worth it based on today's memory pricing.

G.Skill supplied a pair of Trident Z RGB DDR4-4400 memory kits for this article. Each memory kit has a capacity of 16GB and comes with two 8GB memory modules. The sticks clock in at 4,400 MHz and have the timings configured to CL18-19-19-39 with an operating voltage of 1.40V.

The memory modules for the Trident Z RGB DDR4-4400 kit are built on a ten-layer PCB (printed circuit board) with the highest-quality hand-picked Samsung B-die chips. Upon installation, the memory modules default to JEDEC’s standard DDR4-2133 with CL15-15-15-36 timings and 1.20V. However, the sticks come equipped with a single XMP 2.0 profile. Upon activation, the profile bumps the memory modules up to DDR4-4400.

The MSI MEG Z390 Ace serves as the pillar of our Z390 test system. The motherboard is equipped with a robust 13-phase power delivery subsystem to house even the most demanding 9th-generation Coffee Lake Refresh processor and four DDR4 memory slots that accommodate memory modules up to 4,500 MHz.

The MEG Z390 Ace’s memory circuit design makes it an ideal motherboard for memory testing. The MEG Z390 Ace features MSI’s proprietary DDR4 Boost technology. As a result, the memory circuitry boasts an optimized and isolated design. The memory slots share a direct connection to the processor with no impeding components between them. The advantage of this design is that the memory traces are shorter, and the possibility of interference is also lower. As an added measure, MSI also isolated the memory circuit from interference originated by other surrounding components on the motherboard. MSI describes the layout like a PCB within a PCB with a canal that separates the two.