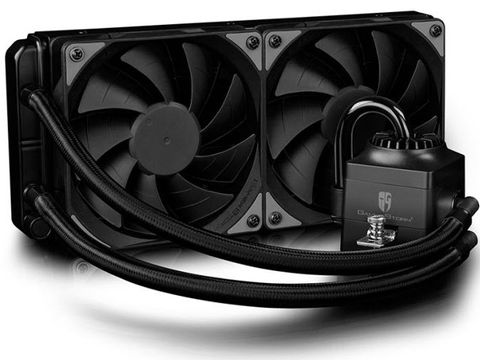 If you’re after a cooler with great RGB options and are willing to slightly sacrifice on performance, look into the Deepcool Gamerstorm 240EX RGB liquid cooler.

How much is a little bling worth? Heir to the Captain EX series, the RGB counterparts run around $30 more initially, but we can expect that to come down by half after some time in the market. The 240EX RGB retails for $129.99 and the 120EX RGB is $99.99. The variable RGB system adds to the price point, with LED strip and pump controllable via motherboard RGB header or an included cable controller, but these external pieces won’t compromise on the performance we saw from the previous Captain EX Series.

You’re going to want a case that supports a 240mm radiator, with enough space for dual 120mm fans. That’s not too much to ask, but be aware that the pump module is higher than average by about an inch. The radiator is also a little thicker than average: If you have a longer video card, you may be limited to top mounting this cooler.

The latest from Deepcool proves the company is hopping on the RGB bandwagon, but does the performance of the Captain 240EX RGB still justify the price jump?

Visually, the newest addition to the Captain Series retains its familiar look, now with added RGB features, including a 13” LED strip with 21 RGB LEDs and a 16” pigtail, a fan hub, an in-line RGB controller, a fan extension cable, and an RGB extension cable.

The pump retains the same overall design of the last iteration in the Captain Series, with a few added upgrades. The tubing now features anti-explosion, anti-corrosion, crush resistant, and thermostable material. The new system impeller is said to allow stronger liquid flow and a bigger delivery head to increase cooling potential. The CPU contact plate features 10% more heat dissipation this time around. It comes with thermal paste pre-applied, but we always use a standardized thermal paste (Arctic MX-4) in order to stay consistent in our reviews.

It’s best to install the fans onto the radiator, then install the radiator in your case first, before installing the water block. Deepcool delivered the product with the tubes aligned so that they extend from the back of the case to the CPU, but you can turn them to put your radiator in whichever orientation you need.

Once thermal paste has been applied (or re-applied, assuming you're not using the pre-applied thermal paste) and the mounting bracket has been installed, the water block drops into place over the CPU and you secure it to the bracket with two spring-tensioned screws.