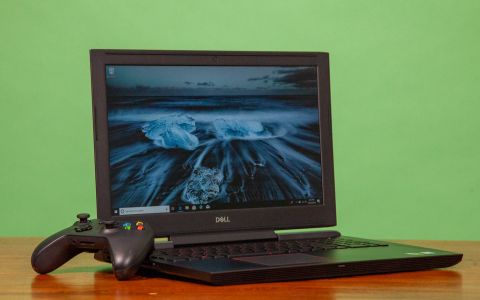 The Dell G5 15 is a good entry-level gaming companion that can grow with you since it’s easy to upgrade. But don’t expect it to handle gaming at the highest settings or heavier workloads very well.

While a heavy-set gaming laptop, the Dell G5 15 isn’t afraid to get a little sexy with it’s red and black styling inside and out. It’s a good fit for those seeking an entry-level gaming device that can handle moderate workloads. If that’s you, this machine ($899 / £669.00 to start, $949 / £762.81 as tested) may be a keeper, especially with its easy upgradeability and good battery life. However, competitors that cost just $100 more offer better performance and display quality.

The G5 seduces with its attractive rear vents and its red and black color scheme. If you go with matte black, like our review sample, you get a smooth black lid with a bold, red Dell logo in the center framed on top by the gray hinge. You’ll have to excuse the smudges, which are inevitable on this magnesium alloy chassis. The machine is also available in Beijing red with black accents for most configurations (more on that in the Configurations section below).

The laptop’s hinge features thick, radiator-like lines running horizontally across. The front-facing edges of the machine’s lid and deck are also covered in rigid lines, although they’re thinner than the ones on the back of the machine. Overall, these lines contribute to the laptop’s high-tech look.

Opening the G5 reveals a whole lot of black and a touch of red. The deck features the island-style keyboard and a simple, white-LED power button on the upper right-hand corner. Red backlighting coupled with with red font makes the keyboard pop—even the Caps Lock button sports a red light when activated. Just for gamers, the W, A, S and D keys are outlined in a thin red border. Both the left and right side of the deck have a vertical line running down an out for a subtle angular look.

Less subtle is how sharp the corners of the deck and lid are. These stabbed my palms occasionally. The deck has ample space,, although I’d prefer less real estate so my wrists can more easily reach my desk or wrist rest.

Keeping with its full-bodied looks, the G5’s display is framed by thick bezels. The bottom bezel is the thickest and sports a Dell logo.

With an Nvidia GeForce GTX 1050 Ti 4GB graphics card, our configuration of the G5 was acceptable but not particularly impressive while gaming at 1080p.

When I played Middle Earth: Shadow of War on high settings, the game ran between 44 and 60 frames per second (fps) but usually stayed in the 45-55 fps range. I experienced no stuttering, whether I was battling a slave master or getting murcked by Ur-dag the Gluttonous. The G5’s fans were distracting at times, as they hummed audibly while I played -- even when I wasn’t engaging in heavy action.

On Rise of the Tomb Raider (very high settings), the game ran at 25 fps, below the 30 fps playable threshold and the GV62 8RE, which has a higher grade Nvidia GeForce GTX 1060 3GB GPU. This is a better score, though, than that of the Legion Y730, which has the same GPU as the G5.

The G5 played Hitman (ultra settings) at 57 fps, which is better than our two comparison laptops here but still below the mainstream gaming laptop’s average score.

In Grand Theft Auto V (very high), the G5 just managed to reach a playable frame rate but was still behind the Lenovo laptop and couldn’t compare to the MSI. It also failed to reach the category average here.

Again, we see the G5 just making the playable frame rate cut, with 31 fps when running Metro: Last Light (high). For what it’s worth, this is better than the Legion Y730 fared.

With a quad-core Intel Core i7-8750H CPU and 8 GB of DDR4 RAM,the G5 chugged along okay when it came to light productivity but stumbled with more aggressive workloads.

With 25 Chrome tabs open, including ad-heavy sites and Netflix streaming an episode of Parks and Recreation, there was an occasional, but not consistent, pause between switching tabs. However, I could hear Leslie Knope’s optimistic voice playing continuously without stuttering.

On the Geekbench 4 test, the G5 fell behind the gaming laptop average. It also did worse than the Legion Y730, which has the same CPU but twice the RAM. In contrast, the G5 pulled one over on the GV62 8RE and its lesser Core i5-8300H CPU.

In our File Transfer test, the G5  copied 4.97 GB of files in 50 seconds, a rate of 102 MBps. That’s quite a drop from what the average gaming laptop in this price range can do, 295.3 MBps so it’s not surprising the G5’s score is also a snooze compared to those of our comparison laptops.

In our Excel Macro test the G5 was more impressive, pairing 65,000 names and addresses in just 43 seconds. Finally, the G5 managed (just barely) to come out on top, besting both its competitors and the category average.

When it came to transcoding a 4K video into 1080p via the Handbrake benchmark, the G5 needed 12 minutes and 14 seconds, longer than average. But to be fair, it was still fared batter than the MSI.

When I watched an HD trailer for the upcoming live-action Pokémon movie (never thought I’d write those words) Detective Pikachu, I was a little disappointed (and not just because Ryan Reynolds has decided to voice Pikachu). Dark images, like black clothing and buildings were a strain to see. I wouldn’t have been able to tell that a Charmander walking across the foreground was orange if I didn't already know that Charmanders are orange.

A mostly black poster in the shadowy part of the protagonist’s bedroom about Dragonite and Hypno was almost impossible read without bending around to different angles. But the brightest colors, like Pikachu’s yellow coat and orange plumes from an explosion were luminous. From a perpendicular viewing angle, the content was still watchable but with a distracting glare going across the lower half.

Getting a good look at darker details in Middle Earth was also challenging. Dark brown patches sticking out of the ground were bland and indistinct, and fine line details, like in the darker parts of Talion’s outfit or the shadows of stone walls were also more subtle.

Despite the G5’s island-style keyboard having just 1.2 mm of travel (shy of our preferred 1.5 mm), its keys have some snap to them. With 74 grams of pressure required, the keys produce a decent clicking noise with each push; however, a little more travel would definitely improve the typing experience. On the 10fastfingers.com typing test, I hit 101 words per minute with a 3.3 percent error rate--a smidge higher than my typical 2 percent.

The 4.1 x 3.1-inch touchpad, with its brushed finish and red outline, is smooth and responsive but not slippery. You get a lot of bounce back when pressing it, which you can hear. Although the touchpad doesn’t have separate buttons, they work strongly with loud clicks. Windows gestures, like three-finger taps and swiping, worked without issue.

The G5 is almost as boisterous as it is thick. The volume was powerful and satisfying during a jam session of The Killers’ “All These Things That I’ve Done.” Sound filled the room of our lab so well that I feared I was disturbing people outside. But sound wasn’t just loud; it was detailed. I could distinguish different instruments, and for the first time, I noticed distinct female voices singing alongside Brandon Flowers in the final iterations of the chorus.

The G5 is upgrade-friendly, with just one Phillips head screw separating you from its internal components. The M.2 SSD is removable after you unscrew one Phillips head screw, while the hard drive can also be swapped after removing four Phillips head screws. There was space for one more RAM stick in our review unit, which you may want if your config, like ours, has only 8 GB installed. While an open DIMM slot leaves room for another stick of DDR4 RAM, if the unit has to ship with 8 GB of RAM, we’d rather have two 4 GB (2x 4 GB) sticks than one 8 GB stick, since using a single channel halves memory throughput. However, Dell scores bonus points for letting users upgrade the M.2 Wi-Fi/Bluetooth module--just remove another Phillips head screw.

It won't last all day, but the Dell G5 has awfully good battery life for a mobile gaming rig. The 56 Whr battery lasted 6 hours and 17 minutes on our battery test, which browses the web over Wi-Fi. That is almost two hours longer than the average gaming laptop in this price range and embarrasses the Legion Y730 and GV62 8RE.

The 720p webcam on the G5 really wanted me to be darker and more orange than I am in real life. I was impressed that the white lights coming from our office’s overhead lights and the sun-filled window behind me didn’t wash things out (save for a bit of the window itself), but my skin was further skewed by the amount of visual noise permanently affixed to it.

Bloat is light  but includes a Dropbox promotion, LinkedIn and Microsoft Solitaire Collection, and McAfee Security and WebAdvisor.

Dell backs the G5 with a one-year limited hardware warranty.

The Dell G5 15 is a sufficient machine for people gaming at moderate settings and who don’t run very intensive workloads. Plus, its red and black design is a treat for the eyes.

However, the machine was lackluster in our performance benchmarks, falling behind the category average multiple times. Its excessive heat and loud fans were mildly distracting when gaming, and its display is dimmer and less colorful than competitors'. If you have $100 more to spend, you can get more power and a more impressive display in the Lenovo Legion Y730. That machine did better in three out of four performance benchmarks, and its display blows the G5’s screen out of the bright-blue waters.

But the Dell G5 15 can handle moderate workloads and gaming, and its impressive battery life means the fun can continue longer than with many other gaming laptops. Further, you can improve performance on your own by upgrading its components, which Dell makes pleasantly easy. This is a solid starter gaming laptop, but one that's not without its flaws.