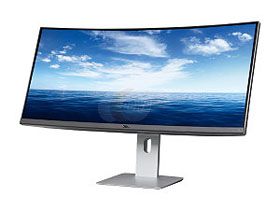 If you’re still skeptical after reading this, don’t worry, we were too until we actually worked with a curved screen. We weren’t sure about the 21:9 aspect ratio either, but as it turns out, while outside the mainstream, both features are pretty cool. Our only real beef so far is the price of admission. For the $1000 you’d spend on the LG 34UC97 or the Dell U3415W, you can get a decent 32-inch Ultra HD screen like the BenQ BL3201PT.

You’re definitely paying extra for the unusual shape of this display. And if you think you might like a monitor that fills your peripheral vision at a two or three foot viewing distance, the curve really enhances that wrap-around feeling. Though we haven’t had an opportunity to try a two- or three-screen setup using the U3415W, it looks like it would be super-cool. It’s probably the cheapest way to create your own flight simulator. And first-person shooter games would be equally amazing.

The other major feature you’re paying for in Dell’s case is a super-accurate monitor. We’ve reviewed many factory-calibrated products but none have posted the out-of-box numbers that we recorded today. The .51dE score for grayscale is the lowest in our database to date. And only the NEC EA244UHD can narrowly beat it in the color gamut test. That and the U3415W are the only two displays we’ve ever measured under one Delta E before calibration.

Unlike the vast majority of monitors, we were unable to improve upon the results with a calibration. Even though Dell provides color hue and saturation controls, and even a two-point white balance control, we couldn’t do any better. That is mainly due to the U3415W’s single flaw, its gamma.

In the Standard mode, there are two small dips in an otherwise ruler-straight tracking chart. Unfortunately, in the Custom Color mode (where adjustments are possible), the starting gamma doesn’t track as well and runs a bit light. If Dell added a gamma editor, this issue could be easily fixed. Of course, many professionals will simply generate a software LUT to dial in all image parameters; at which point the gamma becomes perfect.

Even with a $1000 price tag, we consider the U3415W a good value based on out-of-box accuracy and image quality alone. The ultra-wide aspect and curved screen are bonuses in our opinion. After working with several 21:9 displays, we like both the extra width as well as the curve. If this review still has you asking “why?” please consider trying one out for yourself — it’s difficult to put the experience into words.

Obviously, you get a nice bit of extra screen real estate, and the QHD resolution at 109ppi is ideal for many users. The curve simply provides a little higher degree of comfort than a 21:9 flat screen or multi-monitor desktop. And if you want even more width, the U3415W has that handy DisplayPort output allowing you to connect two screens via one cable.

It’s obvious we like the Dell U3415W very much. It’s a quality product all the way, and you’ll be hard-pressed to find a more accurate display. Coupled with premium build quality and a flexible set of professional-grade features, there’s no doubt it’s earned our Editor Recommended award.

Prev Page Viewing Angles, Uniformity, Response And Lag
31 Comments Comment from the forums
Be In the Know