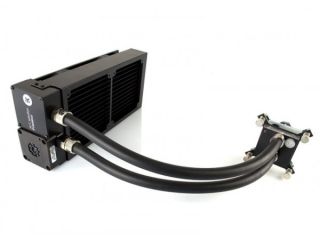 Offering the ease of a pre-filled kit and the convenience of standard fittings for additional water blocks, the Predator 240 looks like it could be the best of the closed and open loop designs. We check its as-delivered performance.

We like the closed-loop coolers give new builders and non-fanatical liquid-cooling supporters the ability to bolt in a device without worrying about spills or contaminants. On the other hand, we realize that many builders eventually begin to wonder “what else can I do with this thing”. Famed for its GPU water blocks among various other related components, EKWB (aka EK) would love for buyers of its XLC Predator 240 to consider a few of its other components as their enthusiasm for liquid cooling grows.

The EAN: 3831109863343 package includes a thick (1 5/8”) radiator with dual 120x25mm fans, a CPU water block with slotted brackets to fit all recent Intel square-pattern mounting holes, a water pump bolted to the side of the radiator, two 16” pieces of 3/8” (I.D.) rubber hose, four G1/4 fittings to connect the pump to the CPU water block, adapter cables, mounting screws, a Torx driver, and a tube of thermal past. EKWB understands that the thickness of the radiator may be a concern in some installations, and provides a compatibility list for several of the most-popular cases.

EK mounts its fans atop the radiator, in “pull” orientation, for a default “exhaust” orientation within the case. That usually works well for top-mounted radiators, though builders seeking to take advantage of cooler air at the front panel might want to flip these. Perfectly located for top-panel installations, a fill port eases refilling whenever the builder decides to add components.

A second fill port is located on the opposite end cap, perfectly positioned for front-panel installations where cooling lines enter at the bottom. This end is also where we also find the Predator 240’s motherboard-controlled fan hub.

A closer look at the installation kit reveals two separate cables, one for motherboard PWM and RPM signals, the other to feed power to the pump and fans. The power cable uses an SATA-type power connection.

EK’s fitting collars pinch hoses circumferentially against a hose barb, and can be hand-loosed when adding components such as a GPU water block.

Next Page Test Methods, Results And Conclusion
15 Comments Comment from the forums
Be In the Know