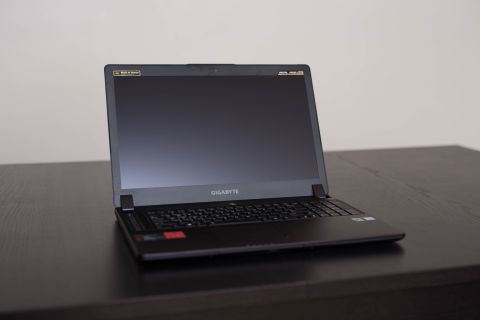 The Gigabyte P37X v6 is a great option for gamers breaking away from the typical gamer aesthetic, and instead presents a thin minimalist design. Featuring an Intel Core i7-6700HQ, GeForce GTX 1070, and 16GB of memory, these components might seem underwhelming at $2,400, but what sets the P37X v6 apart is its vibrant, color-accurate UHD display. However, that 4K display is too much for the GTX 1070 to handle most games, so its added cost ultimately drives the P37X v6's value down.

The "P" series is Gigabyte's main gaming laptop line, featuring a variety of mid- to high-end configurations. Gigabyte revealed the sixth iteration of the P37X not long after Nvidia announced its mobile Pascal GPUs, and that's the model we're testing today.

The Gigabyte P37X v6 shies away from the typical aggressive designs and blazing lights that you might expect from a modern gaming laptop. Instead, we have a minimalist matte black body, contrasted only by the glint of silver from Gigabyte’s logo on the hood. The metal body will flex a bit when dealt with forcefully, but it is still quite sturdy otherwise.

Not much changes on the inside, which greets us with the same matte black surface. When you first open the P37X v6 shipping box, you’ll definitely appreciate its clean and crisp aesthetics. Unfortunately, that appreciation fades once you realize how easily the cleanliness fades; the surface is a fingerprint magnet, and the black finish only exaggerates the fingerprints.

The P37X’s exhaust vents are pretty vanilla. They’re just over 3" long and about 0.4" thick, so it’ll be interesting to see how well the cooling system expels heat generated by the Intel Core i7-6700HQ and Nvidia GeForce GTX 1070.

The hinge is smooth and provides the P37X v6’s display with about 135° of movement.

The two front-facing speakers are located on the bottom lip of the laptop. The sound quality isn’t anything to write home about, so we won't.

The Blu-ray player is found on the bottom, and to the left is an easy lock and release mechanism. You can hot swap the Blu-ray drive with an included hard drive mount.

With a variety of display technologies such as 4K and G-Sync hitting the laptop market, vendors are jumping on the opportunity to elevate the value of their laptops. With the P37X v6, Gigabyte opted for 17.3" 60Hz UHD display with an anti-glare IPS panel for excellent viewing angles. The additional mini DisplayPort, HDMI port, and D-Sub port (a bit surprising) expand the number of displays the P37X v6 can enlist.

The keyboard on the P37X v6 is fairly standard. The chiclet keys are well spaced to provide a comfortable typing experience. The keys are rather flimsy to the touch, however, which takes away from the otherwise satisfactory typing experience.

The keyboard has three levels of backlighting: dim, bright, and auto. The last of those detects the ambient lighting around the keyboard. There are six macro buttons to the left of the keyboard (G, and G1 through G5). You assign macros through Gigabyte’s MacroHub software. The “G” backlight cycles through magenta, green, red, blue, and orange based on the macro profile selected.

The P37X v6’s trackpad is also pretty standard. Its surface is matte with dotted texturing at the bottom. The sleek surface introduced very little friction and was pleasant to use overall. Left and right clicking too hard opens up enough room for dust and debris to slip under the trackpad.