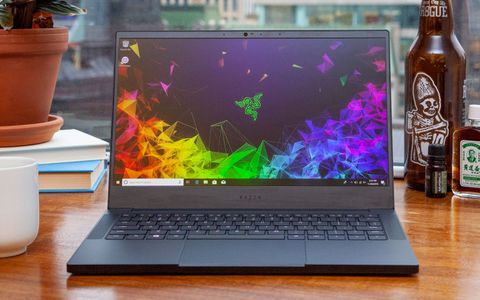 The Razer Blade Stealth is a sleek ultraportable with a nice port selection that’s excellent for productivity and even some light gaming--but it runs too hot.

Razer’s laptops have always been sleek, but the ultraportable Blade Stealth ($1,399.99 / £1,299.99 to start, $1,599.99 / £1,99.99 as tested) is more elegant than ever before. It’s thinner and smaller than previous models, with a stylish black-on-black logo to boot. And now, it has discrete graphics with an MX150 and 4GB of VRAM. But while the Blade Stealth finally begins to overcome old flaws, like short battery life, it runs too hot to be comfortable for some.

Razer has brought its boxy new design language to its premium ultraportable. We saw it a bit earlier this year with the Razer Blade 15, but now it’s style has gone leaner and meaner. Gone is the focus on rounded edges and sleek lines, all in favor of straight edges and matte-black aluminum. It’s unassuming, with Razer’s tri-headed snake in reflective black on the black lid. This is good in my opinion as Razer’s logo is still the lower-back tattoo of gaming icons, so anything to obscure it for everyday use helps. The aluminum is, however, a fingerprint magnet. That may attract more attention than the logo.

The display is surrounded by slim bezels at just 4.9 millimeters on the side. It’s slightly thicker on the top to allow for the webcam and infrared cameras for Windows Hello. I do wish the bottom bezel were thinner, though many of my colleagues didn’t seem to mind.

Speakers flank the single-zone RGB keyboard, and the deck is also made of black anodized aluminum. Each side of the laptop is home to a single Thunderbolt 3 port and USB Type A 3.1 port, and there’s a headphone jack on the left side.

I’m not going to pretend that the Stealth’s MX150 with 4GB of VRAM is enough for gaming on high settings, but it is possible to play games on it. (Many other systems with the MX150, like the MateBook X Pro, use just 2GB of VRAM.) This model also has a 25 watt TDP versus the usual 10 watts. I played Overwatch on the high graphics preset, and it ran between 50 and 72 frames per second (fps) on a Payload match in Dorado. I could’ve squeezed out higher frame rates by turning the settings down. The fans, however, ran loud and non-stop to keep up.

On the Dirt 3 benchmark, the MX150 in the Blade Stealth earned a score of 164 fps, more than twice the premium laptop average (72 fps). The MateBook was second best at 117 fps, while the XPS 13 and Surface Laptop 2 fell behind with their integrated graphics.

I also tried running our Rise of the Tomb Raider benchmark with settings that we use for budget systems (high and medium settings, SMAA anti-aliasing, Full HD), but at 26 fps it wasn’t playable.

With its Intel Core i7-8565U, 16GB of RAM and a 256GB PCIe NVMe M.2 SSD, it’s no surprise that the Blade Stealth is one hell of a workhorse as far as ultraportables go. In my use, with more than 20 tabs open in Chrome and a 1080p video streaming via YouTube, I didn’t have any trouble at all.

On Geekbench 4, the laptop earned a score of 15,878, beating the premium laptop average (12,285) and the competing laptops: the XPS 13 and Huawei MateBook Pro with Coffee Lake i7s and the Surface Laptop 2 with a Coffee Lake Core i5.

On our Excel macro test, which pairs 65,000 names and addresses, the Stealth finished in 1:34, just a second ahead of the category average. The MateBook X Pro was slower at 1:49, but both the XPS and Surface were speedier.

On Handbrake, it took the Stealth 20 minutes and 34 seconds to convert a 4K copy of Tears of Steel to 1080p. That’s faster than average and the MateBook, but both the Surface and XPS performed the task more quickly.

To stress test the Blade, I ran Cinebench R15 10 times in succession while using HWInfo to measure system performance. The CPU throttled; it ran at an average of 3 GHz over the 10 runs at an average of 67.9 degrees Celsius (154.2 degrees Fahrenheit). The CPU is supposed to be able to hit 4.1 GHz on all four cores under ideal thermal situations. It turns out that sitting next to a dedicated graphics card in a slim laptop is far from an ideal thermal situation.

The 13.3-inch, 60 Hz, FHD resolution display on the Stealth is more than bright and colorful enough to get by, though some of its competitors are better. When I watched an FHD trailer for Avengers: Endgame, I could see the individual raindrops on Hawkeye's face, and a purple sunrise popped behind Thanos’ armor.

Razer’s display covers 120 percent of the sRGB color gamut, which is higher than the 117-percent average and more than the XPS 13, but lower than the MateBook X Pro and Surface Laptop 2.

The Blade Stealth’s display measured an average 346 nits of brightness, which is higher than the average (320 nits) and the Surface, but not as luminous as either the XPS or the MateBook.

Razer’s keyboard is a mixed bag. With just 0.8 millimeters of travel and 67 grams of actuation force required to type, it definitely feels shallow. But there’s enough of a bounce in each key to be productive. I typed at 108 words per minute on the 10fastfingers.com typing test, but my error rate doubled from my usual two percent to four percent.

Also, the keyboard has some shrunken keys on the right side, including the backspace, backslash, enter and—most annoyingly—the shift key. The right shift key is to the right of the up arrow, and I found myself hitting that directional key often when I wanted to type capital letters.

The 4.3 x 2.8-inch glass touchpad is smooth and accurate, thanks to its Windows precision drivers. It’s one of the most comfortable touchpads that I’ve used in a long time, rivaling those on Apple’s MacBooks and maybe even better.

Razer has dropped per-key backlighting from the Stealth in favor of single-zone lighting. The company told me that this helps achieve longer battery life. However, it was also a defining feature of the Stealth, so I’m sad to see it go.

When I listened to Mumford & Sons’ “Guiding Light,” the banjo and guitar were distinct and clear from each other, as were the vocals and drums. Sound was a little weak on the low-end, but the volume was impressive for a tiny ultraportable. That’s true at least when directly in front of it. The song filled our lab, but was noticeably quieter from just slightly further away.

There’s not much upgrading to be done here. The RAM in the Razer Blade Stealth is soldered down, so you can only upgrade the SSD. It can be tough to get in there, though. The laptop is held tight by 10 Torx screws (I used a Torx T5 to open it), which I don’t often see on laptops. On the bright side, the bottom panel pops right off without any prying.

The screw to remove the SSD is covered by a thermal pad, but once you peel that back it’s easy to replace the drive.

Historically, the Razer Blade Stealth has had bad battery life. But this model finally hits an acceptable level of an endurance. The 2018 model ran for 8 hours and 5 minutes on our battery test, which browses the web, runs OpenGL benchmarks and streams video continuously at 150 nits over Wi-Fi. That’s up from 5 hours and 21 seconds in the last model.

But that time is still behind the premium laptop category average of 8:22 and more than an hour behind the Surface Laptop 2 and MateBook X Pro. And the XPS 13 lasted an incredible 11:59.

Unfortunately, the 720p webcam on the Stealth is lackluster at best. Sure, it reproduced the color of my red sweater in a photo I took at my desk, but the rest of the photo was so blurry that it didn’t even matter. My beard looked like someone drew it on my face as a prank, and some overhead lights were totally blown out.

However, there is some junk built into Windows 10, including two versions of Candy Crush, plus Netflix, Fitbit Coach and Phototastic Collage.

Razer sells the Blade Stealth with a one-year warranty.

The Razer Blade Stealth is as gorgeous a laptop as the company has ever made, now in an ultraportable laptop that is impressively thin. The graphics performance from the MX150 is passable for some light gaming, and the trackpad is one of the best I’ve ever used. If you can deal with the shallow keyboard, it’s really just the heat that may cause you to worry.

If you can give up some full-size USB ports and want longer battery life, the Dell XPS 13 is a better bet, but you’ll lose some graphics performance. Dell’s machine, however, is even smaller. The Huawei MateBook X Pro also has discrete graphics but with less power. That laptop, however, has longer battery life than the Razer Blade Stealth.

But if sweet black-on-black looks, a solid selection of ports and decent graphics on a true ultraportable are your goal, the Blade Stealth is for you. Just be sure to keep it on a desk and not your lap.