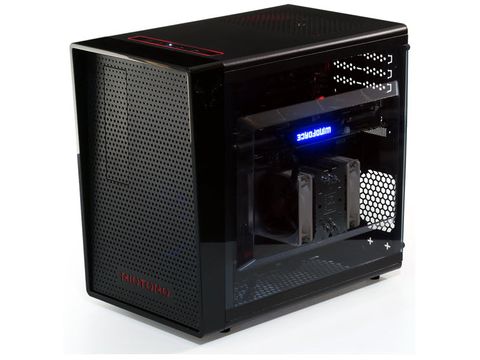 The Riotoro CR1080’s small size and full ATX capacity is attractive for building a compact gaming system. As-delivered performance suffers for scarcity of fans, and builder must pay special attention to the size of the components they choose for their compact gaming build.

Riotoro calls its shortest Full ATX case a mid-tower while bragging about how compact it is. Our How To Build A PC reference article has historically defined a mid-tower as a case tall enough to support an ATX motherboard and PS/2 power supply stacked over each other, and a full tower as a case with enough space for two power supplies above and/or below an ATX motherboard. This works out to a mid-tower range of around 16” to 20", with fans, feet, and component clearance adding about an inch to real-world dimensions. It's not until we break under 16", or over 21", that we start to waffle about what format a case uses.

Because Riotoro places the power supply behind the motherboard tray, it didn't need to worry about component stack height in its CR1080 design. Going back to HP Pavilion ATX mini-towers of the 1990s, side-by-side power supply placement reduces a case design's minimum height by 3.375". Adding space for a thick card cooler on the top end and a pair of fans on bottom, Riotoro finalized on a mini-tower 14.2” height.

The CR1080 front panel has a 5.25” bay (which is still useful for things like fan controllers and O/C control panels), and front-panel ports are located just behind it on the top panel. Surrounded by a ring-of-fire power LED, these include two USB 3.0 ports, headphone and microphone jacks, intermingled with power and reset buttons, and an HDD activity LED.

Unlike the Pavilion-style cases that had the power supply placed over the CPU cooler, the CR1080 puts it behind the motherboard tray. Riotoro added a ½” bubble to the side panel window to create additional CPU cooler clearance. The case has only the standard seven slots, and its 80mm fan mount is empty. Two knock-outs below the fan mount provide a pass-through option for the tubing of external liquid coolers, and the power supply’s intake vent is seen on the left-side panel.

With side panels off, we can see that the power supply bay is fairly large, with drive bays residing above it. An 80mm fan mount is also seen on the front panel, and keen-eyed readers will even notice a spot on the back of the motherboard tray for another 2.5” SSD.

A closer look reveals that the swing-out rear drive tray can hold 2.5” drives on both its top and bottom, or a 3.5” drive on top and a 2.5” drive on bottom. Meanwhile, the slide-in front tray supports a single drive in either 3.5” or 2.5” formats. Three of the 2.5” drive mounting holes on the motherboard tray are visible below the 5.25” bay.

Builder’s who’d like to use the motherboard tray’s 2.5” drive mount will want to mount that drive before they install a motherboard, as a standard ATX motherboard will cover two of the drive’s mounting screw heads. At 12.7” deep, the tray is large enough to hold 10.6”-deep enthusiast boards that are often labeled EATX, and this will still leave 2.1” for front fans and a radiator in that configuration.

Rip its face off, and you’ll find two adjacent 120mm fan mounts with enough space above and below to clear the end caps of most 2x 120mm radiators. Graphics card selection becomes critical when using so large a cooling solution, since the 12.7” internal depth includes fans. A hole beneath the fans allows the tubing of certain 1”-thick radiators to be placed in front of fan grills, though the grills themselves stick out approximately 1/8”. Perhaps its best, then, to leave this option within the realm of entry level case modification.

Sandwiched between the face panels’ metal insert and plastic frame, a foam sheet is responsible for front panel dust filtration. A magnetic filter on the side panel power supply air inlet is far easier to remove. Rather than disassemble the face panel for a thorough cleaning, most of us would blow its dust out using compressed air.

Don’t be confused by all the holes on the bottom panel. Although a couple 120mm fans would fit there, there’s no air filter and very little place to put one. Likewise, the 1” of clearance between the motherboard’s edge and bottom panel eliminates the possibility of adding a radiator to those fans.

The CR1080 uses a split cable to fit both standard and Asus style power LED connections, an HD Audio jack without the outdated AC-97 adapter, and a USB 3.0 internal header plug.

Next Page Building, Testing, And Final Analysis
7 Comments Comment from the forums
Be In the Know