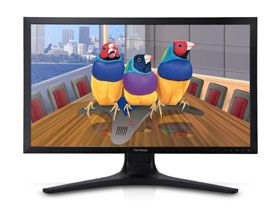 27 inches is on the small side for Ultra HD but the VP2780-4K has enough positive qualities to merit serious consideration. No calibration is required thanks to a factory adjustment that is backed up by a data sheet individual to each monitor. With a street price just over $800 it represents a new value point for IPS screens. Highly recommended

When it comes to new technology, if you want the bleeding edge you have to buy in at the premium level. This is definitely true with Ultra HD. The first screens were all 32 inches (based on IGZO parts from Sharp), and cost around $3000.

Last year we had a major price breakthrough thanks to 28-inch TN displays based on parts from Innolux. Those monitors are selling for $400-600 as of this writing. At the same time, various companies introduced 24-inch Ultra HD monitors using IPS panels from Innolux and LG. We’ve reviewed examples from Dell and NEC and found them to be extremely accurate with their factory calibrations and wide-gamut options.

Today we’re reviewing our first example of the fourth Ultra HD option: 27-inch IPS. Parts are available from AU Optronics, LG and Samsung, but the sample we’re looking at today is ViewSonic’s VP2780-4K.

We haven’t had a ViewSonic display in the labs for quite a while but its reputation for a solid build and good quality control is still intact. The VP2780-4K impresses right off the bat with a factory data sheet that covers all major calibration parameters: grayscale tracking, gamma and color gamut over multiple saturations. All the errors are reported to be under two Delta E and our tests confirmed every number.

There is no doubt this monitor is designed for professional use, yet its price tag is a little lower than expected. With NEC’s superb EA244UHD still selling for around $1000, we expected a 27-inch IPS screen to exceed that. Luckily, we were wrong. This new ViewSonic comes in at a very reasonable $890 MSRP, with street prices a bit lower still.

The obvious question has to be: what’s missing? Well, first there is no wide-gamut option. Many pros work in the sRGB color space, especially in the film and broadcast industry, so that isn’t a huge deal. You do, however, get an EBU option — something we don’t see very often. EBU is the high-definition color space used in European broadcasts. Basically there is slightly greater saturation in green, slightly less in red and blue remaining nearly the same. In our opinion, this solidifies the VP2780-4K’s design goal as a studio monitor.

Other features include 10-bit color courtesy of an 8-bit native panel with frame-rate conversion. The backlight is a white LED, which keeps costs down yet excludes an Adobe RGB gamut. There is also a built-in input matrix that allows simultaneous viewing of up to four sources — just the thing for multi-camera monitoring.

At a price of less than $900, the VP2780-4K bears serious consideration. Can it live up to its factory calibration and professional aspirations? Let’s take a look.

Next Page Packaging, Physical Layout, And Accessories
27 Comments Comment from the forums
Be In the Know