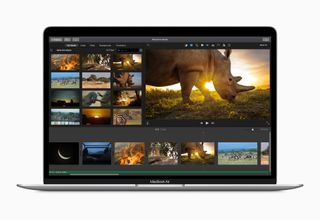 Apple today updated the MacBook Air with the new keyboard found on the 16-inch MacBook Pro, as well as new processors and a starting price of $999. It's also now starting at 256GB of storage, a double jump from the previous 128GB.

Apple hasn't formally listed the names of the new processors, other than that they're  10th Gen Intel. But support for LPDDR4X RAM and Iris Plus graphics on board suggest they're using Intel's Ice Lake chips.

The Magic Keyboard continues Apple's move away from the butterfly switches that were often maligned by critics and towards the scissor switches that were welcomed back in the 16-inch MacBook Pro. This laptop also has Touch ID to log in with your fingerprint.

Otherwise, not too much has changed. It still comes in gold, space gray and silver in a thin-and-light chassis. It doesn't look like we're getting the amazing speakers from the 16-inch MacBook Pro, but the keyboard along may be enough to convince some who were waiting for a change.

Additionally, Apple today quietly announced it is doubling the storage on its Mac Mini configurations.