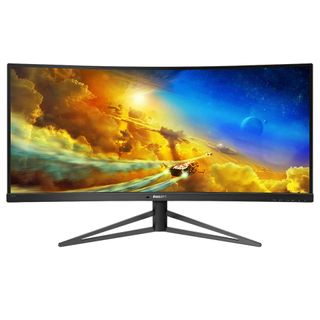 Philips unveiled its new 34-inch ultrawide 345M1CR Momentum this week that competes with the best gaming monitors with a 144 Hz refresh rate. There's one caveat through: it’s intended for consoles, not PCs.

Capable of supporting 21:9 resolutions up to 3440 x 1440 and running at 144 Hz with a 4ms response time (1ms with the blur reduction mode), Philips is calling on gamers to use the upcoming monitor to “take your console gaming experience to a new level.”

With no release date for the monitor yet and no current consoles capable of playing games above 60 frames per second, we have to conclude that this monitor is for the upcoming PS5 and Xbox Series X.

You'll find some differences in terms of capabilities when pitting what we know about the PS5 versus the Xbox Series X. However, both are confirmed to support games at 4K resolution and refresh rates as high as 120 Hz. But neither Sony nor Microsoft has made any claims of ultrawide features yet. Earlier this year, PCGamesN cited a source at Samsung as saying the Korean panel maker is pushing Microsoft to support 21:9 monitors with Xbox, but we have yet to hear anything since.

Ultrawide support would certainly be a luxury inclusion, as only certain large games support the feature, even as developers rush to bump up 4K and high framerate compatibility. Many others just add black bars to the side of the screen, which negates the ultrawide aspect ratio. Competitive and multiplayer games especially are notorious for poor ultrawide support, as the extra peripheral viewpoints can disrupt game balance.

That in mind, we’re not sure yet what makes this monitor especially suited to consoles over PCs. If Sony or Microsoft do end up embracing luxury and supporting ultrawide aspect ratios, monitors may gain another advantage in the competition for couch gamers' hearts over TVs. But, again, there’s just no evidence that either console vendor plans on doing that.

We could potentially take the new display as evidence of Microsoft and Sony working on features they have yet to announce to anyone but panel makers, though we don't know why they would announce features like 4K to the public, yet hold back information about 21:9 support.

Still, console gamers might want to think about upgrading their display anyway. With the PS5 and the Xbox Series X both supporting high resolutions and high frame rates, we’re sure to see 144 Hz console displays becoming more normalized over the next generation. But hopefully they'll have something more to set them apart from a PC monitor.