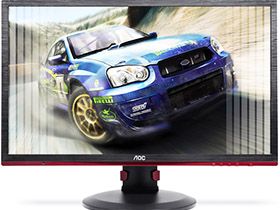 These days, it’s hard to justify buying a gaming monitor without adaptive refresh. But the least expensive screens still leave the feature out to cut costs. For under $300 though, you can have the next best thing – 144Hz. That extra speed, coupled with a capable graphics board, enables smooth gaming performance with very low lag and almost no tearing. The G2460PQU represents a fading genre but remains a good value with solid color performance. FHD resolution means you won’t need an expensive video card to achieve 100fps and up. And its 24” size makes it reasonably portable. FreeSync has opened up adaptive refresh to a large group of budget-conscious users but this AOC is still a slightly better deal.

Already, 2014 has proven to be a great year for gamers. Beyond the fast, efficient CPUs, amazingly powerful graphics configurations, and gorgeous 4K displays, we're seeing more monitors with high refresh rates for gaming, along with technologies like Nvidia's G-Sync. As new capabilities are added and specification sheets grow to include the corresponding jargon, it's more important than ever to quantify what sets all of the options apart. We've received a ton of reader requests for more gaming monitor coverage, so we're sharpening our focus on that genre.

By now, it's commonly accepted that high refresh rates are a key ingredient in a monitor able to anchor the most fully-loaded gaming rigs. When you spend four figures on graphics cards alone, you don't want to flip on v-sync and get stuck at 60 Hz. That'd be like trying to drive a Ferrari in Manhattan.

Displays capable of running at 144 Hz are fairly rare in the PC world. However, we just received our third example from AOC, the brand-new G2460PQU. We’ve mentioned before that many HDTVs run at 120 and even 240 Hz, and many of you have wondered why the same is not true for monitors. The distinction is that HDTVs cannot accept a signal faster than 60 Hz. For the most performance-sensitive games, you want a display that can actually process a 144 Hz signal, and that just doesn’t exist in the realm of television.

If you read our reviews of the BenQ XL2720Z  (a 27-inch screen for $450) and Asus VG248QE (a 24-inch display priced at $270), this screen's specs will look pretty familiar. It is unfortunate that manufacturers still have to rely on a 6-bit/FRC TN panel to run at rates higher than 60 Hz. But for now, that is another universally accepted constant. Overlord Computer is attempting to buck the trend with its IPS-based Tempest X270OC, which we expect to review very soon. But a monitor like that is the exception, not the rule.

The principal hurdle to moving pixels at a high rate is bandwidth. A TN part has a much easier time dealing with 120 or 144 Hz refresh rates because its processing demand is much lower than that of an 8-bit IPS display. We’ve seen enough examples to say that image quality is not noticeably impacted by the reduced bit depth. Frame Rate Conversion continues to be an effective means of rendering 8-bit color with a 6-bit native LCD panel.

While the G2460PQU is new to gamers in the U.S., it’s been available abroad for several months. Comparisons to the Asus and BenQ 144 Hz displays are inevitable. The base specs are nearly identical. But there is one feature AOC doesn’t offer, and that’s any sort of motion blur reduction.

We talked quite a bit about BenQ’s Blur Reduction, which strobes the backlight between frames and can help reduce or eliminate motion blur at the expense of light output. Asus’ VG248QE does the same thing if you connect it to an Nvidia LightBoost-enabled graphics board. AOC, however, does not offer a comparable capability. Is this a potential deal-breaker? We’ll go into more depth about the implications on page nine, after our response and lag tests.

Aside from that one omission, the G2460PQU's specs suggest that it's a well-made gaming-oriented screen with the sort of performance attributes discerning enthusiasts are looking for. Let's see if those figures bear out in practice.

Next Page Packaging, Physical Layout, And Accessories
43 Comments Comment from the forums
Be In the Know