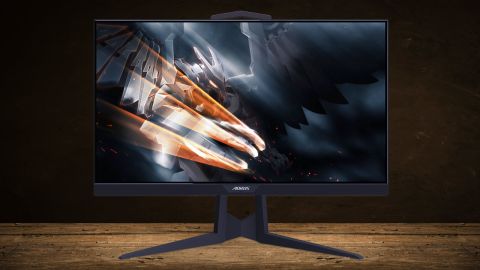 The KD25F runs with an elite group of super-fast monitors. So for comparison, we rounded up our most recently tested displays that run at 240 Hz: Alienware’s AW2518H, AOC’s AG251FZ and ViewSonic’s XG2530. We also threw in two 144 Hz screens, ViewSonic’s XG240R and MSI’s MAG24C.

Clearly, the 240 Hz screens are very bright. They’re all based on the same AU Optronics panel, so that stands to reason. There aren’t too many environments where you’ll need 400 nits, but if you have some sunlit windows, you might find it an asset. The KD25F beats Gigabyte’s 400-nit claim with over 404 nits.

Of course, that doesn’t do wonders for black levels, which for the KD25F are proportionally high, like the rest of the TN monitors. Only the VA-based MSI boasts a true black. The other screens look more gray than black. However, at a more realistic setting of 200 nits, the effect was mitigated. The KD25F’s resulting contrast is within striking distance of the TN average at 947.9:1.

After calibration to 200 nits, the KD25F ranked fifth in our black levels test, but moved up one spot in the contrast test. Adjustments made to gamma and white balance did not significantly reduce dynamic range, so we think the gain in color accuracy was worth losing a few contrast points. The increased color saturation afforded by our gamma adjustment visibly improved picture quality and perceived resolution.

The KD25F’s ANSI contrast score also net it a fifth-place finish among our super-fast gaming monitors. If ultimate picture quality is your goal, you can’t go wrong with the MSI MAG24C with its VA panel and extended color gamut. But if you want ultimate speed, one of the 240 Hz models here is a better choice.

Prev Page Features and Specifications Next Page Grayscale, Gamma and Color
6 Comments Comment from the forums
Be In the Know