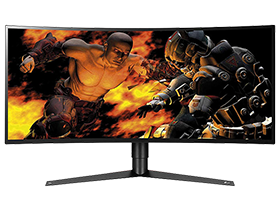 The LG 34GK950F represents a new class of full-featured, ultra-wide gaming monitors. It’s not cheap but offers all the features and performance of the best 16:9 screens. It’s great as an upgrade or for someone looking to make the shift to ultra-wide.

If you’ve decided to make the jump to an ultra-wide monitor, you’ve likely already discovered they are expensive and most don’t offer every feature a gamer might want. Refresh rates are generally in the 75-120Hz range, and things like HDR and extended color can be hard to find.

LG’s new 34GK950F combines many desirable features into a single display. An IPS panel runs at a 144Hz refresh rate without overclock while delivering FreeSync 2, HDR10 and extended color covering over 90 percent of DCI-P3. LG even throws in blur reduction, which isn’t often seen in FreeSync monitors. This is all wrapped in a stylish chassis with an ideal 1900R curvature with QHD resolution (3440x1440) and a pixel density of 109ppi. At around $1,000 (£990), it isn’t cheap but offers more features than many similarly priced screens, including its predecessor, the LG 34WK650.

What is KSF phosphor?

The 34GD950F’s main draw is its wide gamut, which comes courtesy of a new technology called KSF phosphor. It’s similar to the quantum dot backlights seen on monitors like the Samsung C49HG90. Explained simply, phosphor material is deposited onto a layer of plastic or glass, which goes between the backlight and the thin-film transistor (TFT) or LCD pixel layer. When the phosphor is excited by the backlight’s LEDs, it emits light of its own, which not only increases color saturation but reduces the backlight’s power requirements. While quantum dots emit red and green light when excited by a blue LED, extending the gamut volume of those primaries, KDF phosphors work with white light and emit red and green. The result is an inexpensive way to increase a monitor’s color gamut without resorting to exotic RGB LEDs.

The 34GK650F ships in three pieces, plus a useful cable bundle that includes USB 3.0, HDMI and DisplayPort, which are certified to support high refresh rates and high bandwidth content at the monitor’s native resolution. The power supply is a large external brick. The base and upright are mated with a captive bolt and then snapped onto the panel. No tools required.

The 34GK950F is all-business from the front with a thin, flush-mounted bezel and all-black base and stand. Though it is plastic, it’s supported by a stout metal core. There are no lighting effects, but the power button emits a soft red glow when the monitor’s on. The anti-glare layer is 3H hardness and provides the same reflection control as nearly every computer monitor available today. There is no grain to detract from its sharp, bright image.

The stand is wobble-free and offers 110mm of height adjustment range, along with 20-degree swivel in each direction and 15-degree and 5-degree back and forward tilt, respectively. Like all curved screens, the side profile is a bit chunky but nicely proportioned. There’s a small cable hook integrated into the stand to keep your desktop tidy. Red trim accents encircle the upright’s mounting point and set off the stand’s long feet. Stability will not be an issue.

Around back, you’ll find a 100mm VESA mount under the snap-on upright and LG’s unique rear-facing inputs. LG configures many of its monitors this way; it’s a pleasure to use. The panel’s curvature provides ample clearance for wall-mount setups. Video inputs include two HDMI 2.0 and one DisplayPort 1.4. You also get one upstream and two downstream USB 3.0 ports. There are no speakers, but headphone users can plug their favorite cans into the 3.5mm jack.

The OSD is appropriately styled for gaming with a deep red and black color scheme. At the top, you’ll always see the refresh rate, FreeSync status, blur-reduction, response time setting and HDR info. Options are evenly split into five sub-menus. There are eight picture modes, including an accurate sRGB preset and an HDR Effect setting that attempts to enhance SDR content. Use the latter on a case-by-case basis as it’s not always a pleasing change.

Calibration is possible in most modes with four gamma presets and four color temp modes. You can adjust the RGB sliders in the Custom slot. The 34GK950F is a DCI-P3 monitor, so unless you choose the sRGB mode, your content will be rendered in that gamut. sRGB mode is very accurate and locks out all adjustments except brightness. It can’t be calibrated but doesn’t need to be.

Gaming options are many and include FreeSync 2, along with three overdrive levels, a selection of aiming points and blur reduction. If you want to increase visibility in shadowy areas, reach for the black stabilizer slider.

We started with the default Gamer 1 preset, which unlocks all image controls. A few tweaks of the RGB sliders left us with excellent color, grayscale and gamma accuracy in the DCI-P3 color space.

If you want to use sRGB instead, choose that mode. Only brightness is adjustable, but, fortunately, color is nearly spot-on. HDR signals automatically switch the 34GK950F into that mode, and you can still change the brightness and contrast levels, which is a nice touch. To hit 400 nits as advertised, max the Brightness slider and leave Contrast on 70. There are no color adjustments for HDR, but we found the monitor to measure well, if not close to reference level.

To enjoy the 34GK950F’s full potential, you’ll need a decent video card with DisplayPort 1.4 and/or HDMI 2.0 support. Earlier versions of these interfaces will limit you to 100Hz, though FreeSync 2 works fine regardless. Obviously, you’ll need the newest connections to support HDR too. We booted up a Windows 10 machine to enjoy the entire feature list.

FreeSync 2 means that even framerates from 50-70 frames per second (fps) look good. Since the 34GK950F has Low Framerate Compensation (LFC), occasional dips below 55Hz will not spoil the fun. Our old gaming system with its AMD Radeon R9 285 card maintained over 60 fps in Tomb Raider with smooth motion and quick response. We were limited to 100Hz, but since the card couldn’t manage that rate, it wasn’t an issue. Overdrive worked well at its fastest setting without any visible ghosting. This monitor can breathe new life into an older system with adaptive sync and wide gamut color.

To check out HDR content, we had to use our Nvidia-equipped PC with its GTX 1080 Ti FE graphics card. Giving up FreeSync 2 wasn’t a problem because framerates stayed over 100 fps and we could engage the 1ms blur reduction feature, which works all the way up to 144Hz. HDR added a bit of pop, but it wasn’t as dramatic as what we saw during our reviews of 1,000-nit monitors, like the Asus ROG Swift PG27U and Philips 436M6 Momentum. Again though, motion was super-smooth, and response was instantaneous. We perceived no lag whatsoever, and blur reduction worked without reducing brightness. Call of Duty: WWII proved every bit as intense as when we’ve played it on premium full-array backlight displays. That last one percent of realism wasn’t there, and highlights didn’t pop quite like they do on the aforementioned Asus or Philips monitors, but for a lot less money, the 34GK950F provided close to the same experience.

Using HDR for the Windows desktop added a nice bit of pop to photos and videos. Text, no matter how small, was easy to read, and icons had a bit more perceived detail than their SDR counterparts. We’re finding that even edge-lit HDR monitors can offer a nice gain in all-around use; you don’t have to play games to appreciate the new technology. The extra burst of color is nice too, with redder reds and greener greens being the most apparent.