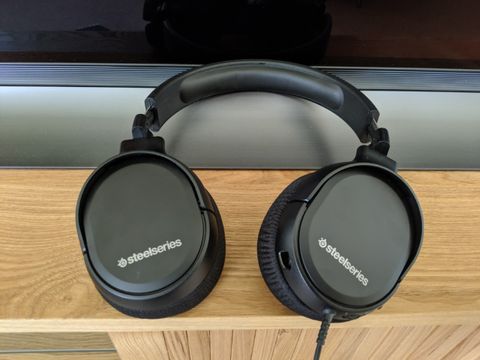 There's a great package crammed into the SteelSeries Arctis 1, considering its budget price. But there are better-sounding headsets available that cost just a little bit more.

SteelSeries’ Arctis headset line has become known for shaking up the headset market like a sonorous, perfectly cushioned Pac-Man and is nearly as synonymous with gaming too. The SteelSeries Arctis 1 gaming headset brings the brand to an even cheaper price point ($49.99 at the time of writing).

At this price, the cans are missing some features found in the best gaming headsets. The Arctis 1 doesn’t feature the distinctive elasticated headband design of its siblings, and while there is a wireless version offering support for just about every gaming device you could conceive of (PC, PlayStation 4, Xbox One and Nintendo Switch), this wired version we're reviewing has a 3.5mm connection only.

Despite those fractional margins in pricing, the Arctis 1 feels like a very different set of cans than the Arctis 3. The biggest and most obvious difference is the headband, which uses a more traditional aluminum chassis design and covers it in lightweight black plastic. It’s adjustable, just like any other headset on the market in 2019, and the level of clamping force around your ears feel just about right. It won't budge, even if you make sudden headbanging movements. The headband packs in plenty of soft cushioning on the underside, but it's not quite as comfortable as the Arctis 3.

Things get a bit more familiar lower down, as around each earcup is the same super-comfortable, cloth-finished memory foam padding found on pricier Arctis models. The shape and size of these earcups is perfectly suited for sitting comfortably for long periods and creating an effective chamber for the lower frequencies to resonate in. There’s a lot of noise leak if you turn these all the way up, which has more to do with the breathable fabrics used than any inefficiency in the earcups' shape.

At the rear of the left cup are volume and mic mute controls. On the front is a detachable mic, a first for the Arctis series. Unlike the headband though, we’re fine with this deviation from the line's tried-and-tested formula. We’ve yet to lose a detachable mic, which is the major primary downside of such a design.

The Arctis 1 can be rotated to lay out flat for easy packing and transporting and feature a silver, polygonal design on the cloth covering each driver. The cable’s not braided and ends in a 4-pole jack. There’s also an extension cable with split audio and mic inputs bundled in the box.

Visually these looks just the same as SteelSeries' other Arctis headsets, except for the headband has a matte black finish and a restrained splash of SteelSeries branding in matte silver at the bottom of each earcup. There’s no RGB, and the headset isn't available in any other colors. Black is very much the new black in gaming headsets this year.

There's a volume wheel and mic mute switch, but no mic wheel. But the one feature we really do miss is a ChatMix scroll wheel for varying vocal and other audio volume. No one wants to have to navigate a game’s options menus while deafening background music plays and their Discord buddies are mumbling something inaudible underneath it all.

This low-end model features the same 40mm drivers you’ll find in the Arctis 7 2019 Edition, but the overall sound is quite different. These cans sound noticeably more bass-heavy, particularly when listening to music. The low-end from kick drums, basslines and distorted guitars tends to overpower subtler and softer elements in the mix, which I don’t find with the Arctis 7 or the Arctis Pro Wireless I use on a daily basis. Oddly, with the Arctis 1, it almost sounds as if there’s a software EQ being applied; however, with the headset using a 3.5mm connection instead of USB, the SteelSeries Engine software truthfully can’t tweak the headset's audio output.

The Arctis 1's sound made more sense after I booted up a few games and started popping off mobs and other enemies in shooters and action games. Bass sounded great when bullets were flying. Many headset manufacturers have historically graded their EQ to boost low-end frequencies, but the Arctis series has a lovely, flat response that stands out from the typical gaming cans.

The upshot is that bombastic titles that feature a lot of things being destroyed at a given moment sound great on the Arctis 1. However, in atmospheric RPGs, walking sims and other slower genres, where your ear might drift to the score or ambient noises, they’re not quite as articulate as higher priced Arctis headsets. As for why there’s a discrepancy in sound, we’re stumped. Construction materials do certainly contribute to an audio device’s character, but we wonder if there’s some hard EQing going on in this model that might have been better left as it was.

I do have a lot of love for Arctis' Clearcast detachable mic, though. It's easy to position in place and produces clear, clean vocals that sound great for the price.

This being a 3.5mm connection, there’s no opportunity to tweak EQ settings or save profiles via SteelSeries' Engine software. But this makes a lot of sense for this price point.

SteelSeries built an attractive $50 package with the wired Arctis 1 headset. Although it lacks the comfort of ski goggle headband models, its firm and well-cushioned while maintaining breathability. The headset produces good audio for the price, but its output isn't quite as flat and clean as with other Arctis cans.

Although the $50 price tag is reasonable, there are a lot of headsets in that price range, including from SteelSeries itself. The Arctis 3 2019 Edition is tangibly better in audio and comfort and just $10 more. Meanwhile, the wireless version of this Arctis 1 is $100. Plus, the Arctis 3 is also available in two different models, a wired version for $61 and a Bluetooth model for $85. What’s a shopper to do? Frankly, you’re better off paying $10 more for the wired Arctis 3 model if you intend to primarily use your gaming headset on PC, due to the boost you'll notice in sound and construction quality.

But if you absolutely can't go over $50 for a gaming headset, the Arctis 1 is competitive against other headsets in this price range and a good deal for the price.