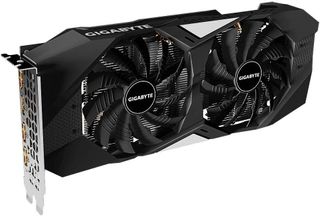 It's nearly 18 months since Nvidia launched its ray-tracing-capable RTX graphics cards. They're still the best money can buy. And now, belatedly, they're getting cheaper. This Gigabyte GeForce RTX 2070 Windforce 8GB board is just $399 on Amazon. That's a very interesting deal.

Unsurprisingly, given the pricing, this is a stock rather than overclocked board. But you still get 2,304 CUDA cores running at a healthy boost clock of 1,620MHz. To that you can add 64 render outputs, and 8GB of of 14Gbps GDDR6 running over a 2560-bit memory bus.

Gigabyte GeForce RTX 2070 Windforce 8G: Now just $399
This is the cheapest Nvidia GeForce RTX 2070 graphics card on the web. The 2070 has been somewhat trumped by the new 2070 Super chipset. But at this  price, it offers a compelling value proposition for cutting edge 1440p gaming.

Of course, it's not just the 2070 Super that sits higher up the Nvidia RTX range. The likes of the 2080, 2080 Super and 2080 Ti are yet more powerful and yet more expensive. However, as the weapon of choice for slick, high-frame-rate gaming at the 1440p resolution, the plain old 2070 has always been compelling. At this price, some $100 lower than launch, it makes for a very nice deal.

If this RTX 2070 isn't quite doing it for you, check out the rest of our gaming graphics deals.