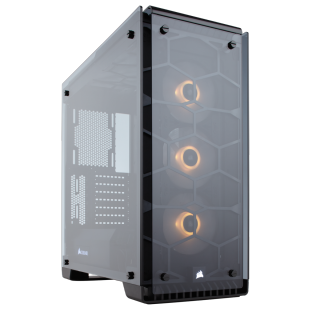 Does your rig deserve a new home? Well you might be in luck, we’ve just spotted this stellar deal on Corsair’s Crystal Series 570X RGB case. Rocking in at just $140, this tempered glass Mid-tower box of joy has been reduced by $50 ahead of Black Friday.

Corsair's Crystal Series 570X RGB is on sale now for $140 at Newegg. That's an impressive 26% off it's regular price!

Since its early days, Corsair has been well renowned for its case building heritage, and it's something the company has continued to lean on in this era of glass and light that we currently inhabit. The 570X RGB comes with no less than four tempered glass side panels, and three 120mm Corsair SP RGB fans as standard to really take advantage of that combo.

It’s not just all glass and flashing lights, there's substance to this thing, and the Crystal 570X RGB been designed to maximize airflow, and make the builder’s life as easy as can be. Check out our full review here, but if you’re after a quick dirty summary, read on.

Not exactly mind-blowing given the current state of play in the world of Mid-tower cases, however the big advantage the Corsair Crystal Series 570X RGB has over its competitors is those glass panels. Ok, so glass is not something that typically evokes images of good heat dissipation and brilliant air flow, yet in this case, Corsair has mounted the panels off-set from the actual chassis itself. Each glass pane sits a good 10mm away from the case, with four stand-offs, one in each corner to mount them securely to. Not only does this look stylish as heck, but it also allows the fans access to as much air as possible and gives plenty of room for your exhaust fans to vent too.

There is a slight detriment to that gap however as so far as dust is concerned, that said your graphics card and processor will thank you, even if it means a little extra cleaning every now and then. On top of that the 570X RGB is  compatible with a fair few radiator sizes too. In fact you can mount a 360mm in the front, a 240mm in the roof, and a 120mm in the rear if you so desire. Additionally, there’s two removable fan trays, in the front and in the roof which helps when it comes to installation.

If you do plan on liquid-cooling in this beast though we would advise you stick to slim edition radiators, preferably less than 30mm thick.

Once past those tempered glass panels, you’ve got access to a half-size PSU cover, with ample room to tuck cables out of the way. Plenty of cable cutouts, complete with rubber grommets, a cable routing bar in the back to hide everything, an integrated RGB controller with external button control, and support for mounting two 2.5-inch SSDs and two 3.5-inch HDDs in the rear of the case behind the motherboard tray as well. That’s not bad for an ATX-Mid Tower at $140.

Admittedly the Corsair Crystal Series 570X is getting a bit old in the tooth now, it originally launched way back in late 2016, so there’s a few mod cons that are missing from the whole furor. Most notably there’s a significant absence of a vertical graphics card mount, or any USB Type C support, and to be fair even back in the day we would've loved to have seen a full-length PSU cover.

Ultimately, if you’re looking at investing the cash, you’re not going to be disappointed. Corsair's Crystal Series 570X RGB looks fantastic, is well ventilated, has complete dust filtration at the main fan locations, and is a pleasure to build in. And if this doesn’t take your fancy, you can also check out our Best PC Cases of 2019 article here as well for something that does.