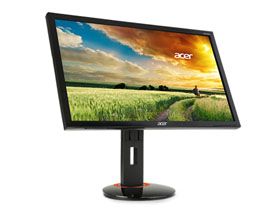 In our Ultra HD monitor reviews so far, we’ve seen mostly professional screens (with prices to match) rather than products created specifically for gaming. This isn’t surprising, since many UHD displays are still more expensive than most of us are willing to pay. Aside from a little relief in the 28-inch category, a 3840x2160 pixel display can still cost as much or more than the rest of your rig.

Acer did something very smart in designing its XB280HK. By optimizing a value-priced TN panel for performance and adding G-Sync, it created a product truly worthy of a high-end gaming system. You won’t get an extras like motion blur-reduction, 144Hz refresh rates or special picture modes. What you do get for around 800 dollars is the best possible Ultra HD gaming experience available right now.

While the price is high, bear in mind that you need to spend some serious coin on a decent video card (or cards) to push more than eight megapixels above 30 frames per second. That’s the lower limit of G-Sync technology, regardless of which monitor you buy. Granted, the frame-doubling technique used by Nvidia prevents increased input lag when frame rates drop below 30. But realistically, the experience is greatly diminished by this point, so skimping on graphics power just doesn’t make sense when Ultra HD is the goal.

If you’re concerned about the XB280HK’s 60Hz ceiling, you needn’t be. When G-Sync is active, the elimination of tearing and stuttering artifacts imparts a smoothness to motion that makes you think the refresh rate is much higher. In fact, at this point in time, the choice between G-Sync, FreeSync or 144Hz comes down to whether or not you want to lock yourself into one brand of video board.

At 144Hz, most artifacts, including tears, are pretty minimal as long as you can keep the frame rate high. But using G-Sync means the high refresh rate isn’t really necessary. So we don’t believe the 60Hz limit is a big deal. My experience in actual game play was overwhelmingly positive. With a powerful system behind it, this monitor excels.

In the more traditional metrics, we’re pleased with the XB280HK’s color and grayscale accuracy. Our only wish is for better contrast. Though it competes favorably with other 28-inch UHD/TN screens, it lags a little behind competing 24- and 27-inch gaming monitors we’ve tested.

We continue to maintain that more choices mean lower prices and better quality. Acer is the first company to put Ultra HD and G-Sync in the same chassis. It certainly won’t be the last, though. As GPU speeds continue to increase, we’ll probably see more and more high-res screens made for gaming.

The XB280HK isn’t perfect. But it is a competent display that will undoubtedly attract many enthusiasts. For its unique combination of Ultra HD and G-Sync, plus solid performance and build, we’re giving it the Tom’s Hardware Editor Approved award.