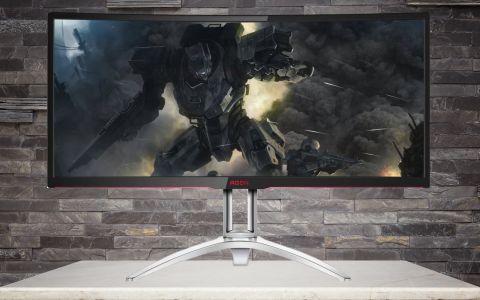 To read about our monitor tests in-depth, please check out Display Testing Explained: How We Test Monitors and TVs. We cover brightness and contrast testing on page two.

To compare the AG352UCG6’s performance, we’ve selected five VA monitors from our database. One is its older sibling, the AG352UCG. Also from AOC is the AG322QCX. MSI is represented by the Optix MPG27CQ, as is the Asus ROG Strix XG35V and BenQ’s EX3501R.

VA monitors are not known for super-high output, but they provide enough light for any indoor environment. The AG352UCG6 is rated for 300 nits but surpassed that in our test. Black levels were  mid-pack and so was overall contrast. At 2337.8:1, it’s only a tiny bit higher than the model it replaces.

At its lowest brightness setting the AG352UCG6 outputs 26 nits brightness, which is far too dim to be practical. To make the AG352UCG6 as dim as possible while still being usable,  we brought the brightness slider up to 12 and got to 50 nits. Then we checked to see if black levels and contrast were consistent, which they were with a respectable 2206.5:1 ratio.

Not all VA panels are created equal. Though the technology has better black levels and contrast than IPS (in-plane switching) panels, some VA displays are better than others. For our calibration to 200 nits brightness, we turned up the shadow control and reduced contrast to eliminate detail clipping issues. The resulting 1475.9:1 value is only slightly better than a good IPS screen. The AG352UCG6 panel is a step backward from the older AG352UCG in the contrast department.

The AG352UCG6 came in last place in the ANSI test at just 1353.6:1. While this is good intra-image contrast among gaming monitors in general, it does not live up to the potential of a VA panel.

Prev Page OSD Setup & Calibration Next Page Grayscale, Gamma & Color
6 Comments Comment from the forums
Be In the Know