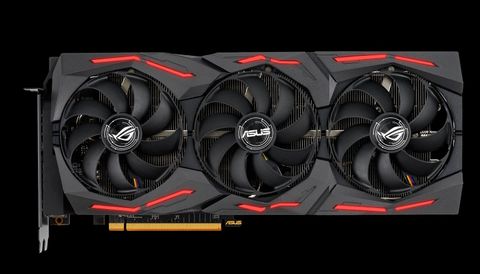 The Asus ROG Strix RX 5600 XT O6G Gaming is a capable 1080p ‘ultra’ card that’s able to hit 100 fps on most games we tested, save for the GPU-hobbling Metro: Exodus. When comparing performance to the Sapphire Pulse RX 5600 XT OC, it does run a few percent slower. Looking at a reference RTX 2060 for comparison, this Asus card is also a couple of percent slower. This is due in large part to the lower memory speeds. Ther’s also the issue of the curious power and clock speed fluctuations we saw during testing. They don’t seem to significantly affect performance, but could affect temperatures and acoustics.

As far as looks go, the card is easy on the eyes and will fit in well with most build themes. If you want RGB lighting elements, the card has enough to illuminate the inside of your case without being too bright. If and when you don’t want RGB lights glowing in your face, a button on the back of the card disables all of them. For some, this could be more convenient than opening up the software to do so. There’s also a trio of headers on the end of the card for controlling fans and more RGB lights, though most motherboards have these already.

The price is our primary concern here. At the time of this writing, the O6G Gaming was $339, compared the Sapphire Pulse, which performs a few percent better and costs just $289 and its better performance. Unless you truly value those on-card fan and RGB headers, as well as the extra RGB lights, the choice becomes obvious. That said, if you want the ability to disable RGB lighting with the touch of a button, attach additional fans and RGB strips to the card, or would like a quieter card, that extra $40 may be worth it. Expanding the scope to this card’s competitor on the Nvidia side, the RTX 2060 is priced about the the same (or slightly less) with slightly better performance (albeit by a couple of percent), while more power. You do, though, get hardware ray tracing with the Nvidia card. But our testing has repeatedly shown you’ll mostly want more graphical power overall if you plan on enabling ray tracing on the limited number of titles that feature it.

In the end, the Asus ROG Strix RX 5600 XT O6G Gaming is a solid card for 1080p and 1440p gaming. The cooling solution works very well and runs quieter than the Sapphire. But overall, it’s just too expensive when looking at its direct competitors. Until Asus lowers the price, there are better options out there, from both AMD and Nvidia.

Prev Page Software: Aura Sync
2 Comments Comment from the forums
Be In the Know