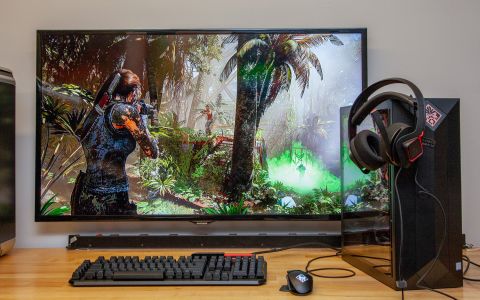 The HP Omen Obelisk is HP’s most upgradable PC, but it needs at least one more fan and isn’t entirely customizable.

Update (8/16/2019): We tested the upgraded HP Omen Obelisk. Check out our review to see what's new about this edition.

Most pre-built gaming desktops come with a proprietary part or two (often the motherboard). But the HP Omen Obelisk ($899.99 / £999 to start, $2,378.99 as tested) is based entirely around standardized, user-replaceable components. And while it’s super easy to make simple replacements, cable management is a bit difficult. Still, the Nvidia GeForce RTX 2080 graphics card and Intel Core i7-8700 CPU make for a competent gaming machine and workhorse.

The Obelisk is designed to be fully upgradable by the user, but it still maintain’s HP’s Omen aesthetic. That means angular black lines with red accents, but this case is still minimal enough to be attractive. The Omen logo is on the front and can be lit up to any color with the Omen Command Center software. The front ports are on the very top of the machine in a slight indentation. It’s not big enough to hold a hard drive, but it could protect smaller flash drives.

Our unit came with a glass side panel with the Omen logo printed on top, and inside you can see the majority of the parts. It’s lit in red, and you can’t change it in the software or turn it off, which is mildly infuriating.

The very top of the unit has an edgy, triangular cut-out pattern that appears like it could provide ventilation; however, there’s a metal plate underneath.

In fact, the airflow is a little worrisome. There’s no intake fan, which leaves paths only through the bottom (this machine could use some taller legs) and the rest of the top, both of which have filters pre-installed. There are also some grilles on the glass window. The exhaust is an 80 mm fan in the back of the case. Even the CPU fan is questionable. It’s slapped diagonally on top of the CPU heatsink, which looks messy, especially on a configuration this expensive.

There are a bunch of cables within the main chamber that could likely be tucked behind into a secondary chamber with a different case design (see below).

To open the system, all you need to do is press a button labeled “internal access” on the back of the system. The glass panel pops off for easy removal, providing access to the majority of the parts.

But if you’re looking to do any sort of cable management through the back of the system, things get difficult. To remove the rear panel, you have to find a single screw towards the bottom of the inside of the case (we had to move some power supply cables to the side to find it). Once that’s removed, you can slide the rear panel off, but it’s a tight squeeze for any cables you may want back there. In fact, there are some cables zip-tied inside the main chamber, seemingly due to lack of space.

The biggest issue one may focus on is the RAM. The motherboard only has two DIMM slots, so if you want to upgrade later, you'll require a whole new set of RAM to replace the existing pair. A future model is set to have four DIMM slots.

Our Omen came packing an Nvidia GeForce RTX 2080 with 8GB of GDDR6 VRAM, which packs plenty of power. I played Battlefield V at high settings with DX12 on at 4K resolution, and it ran between 50 and 67 frames per second (fps). When I switched it to 1080p with ray tracing on at medium settings, it ran between 80 and 90 fps.

On Hitman (ultra settings), it ran at 133 fps in 1080p and 73 fps in 4K, beating the gaming desktop average in both resolutions, but falling slightly behind the Corsair Vengeance 5180, which also has an RTX 2080.

On Rise of the Tomb Raider (very high), it hit 82 fps at 1080p and 27 fps at 4K. It beat the average in FHD but fell behind in 4K, while the Vengeance beat the Obelisk in both scenarios.

The Omen Obelisk hit a perfect score of 11 on the SteamVR performance test, making it perfect for an HTC Vive or Oculus Rift. The Vengeance also hit this score.

HP’s desktop took 10 seconds to copy 4.97 GB of files, which translates to a rate of 508.9 MBps. That’s faster than both the average and the Vengeance.

It took the Obelisk 39 seconds to pair 65,000 names and addresses in our Excel macro test. That’s slower than average (0:34) and the Corsair Vengeance.

The Obelisk completed our Handbrake test, which transcodes 4K video to 1080p, in nine minutes flat, edging out the Vengeance (9:07), but both are slower than the gaming desktop average (7:16).

While HP sells a variety of Omen-branded peripherals, the box comes with standard HP pack-ins. The mouse and keyboard are made of cheap plastic and aren’t ready for gaming. For anything other than basic productivity, you’ll want to pick up something else. I wish HP would sell two versions of the Obelisk: one without peripherals at all and one with its Omen-branded mechanical keyboard and RGB mouse.

There are a bunch of extras on the Omen Obelisk, though only one is really important: HP Omen Command Center. It offers a glimpse at CPU, GPU and RAM utilization and controls the PC’s limited customizable lighting. If you have HP’s other Omen peripherals, you’ll be able to program macros and customize the RGB lighting with the software as well.

HP’s other add-ons include JumpStart, which has a series of tutorials, McAfee Security and Netflix.

The rest of the software is the bloat that’s bundled in with Windows 10, including Fitbit Coach, two different versions of Candy Crush, Royal Revolt 2: Tower Defense and Township.

HP sells the Omen Obelisk with a 1-year warranty.

In between that and our model are a plethora of options, including AMD Ryzen 5 and 7 alternatives, more Nvidia 10-series choices and the RTX 2070. Depending on the configuration, you may get a 300-watt power supply instead of the 500 watt PSU in our review unit.

The HP Omen Obelisk is the company’s most upgradable PC, but there’s still work to be done. There’s not a lot of room for cables, but every part is standardized and can be replaced.

If you’re looking to get the top-end model like we did, you should also consider the Corsair Vengeance 5180, a similarly specced PC that is just a smidge more expensive but has much better air cooling (and a water cooler), an even better-looking case and slightly stronger performance. You can’t get a lower-end Vengeance though, so if you want something cheaper or with an AMD Ryzen processor, HP offers far more options that you could always upgrade later.

We know an improved version is coming with more DIMM slots and water cooling, but if you’re looking for a machine you can upgrade down the line, the Obelisk is a serviceable start.