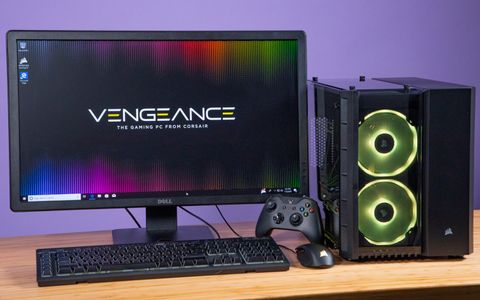 The Corsair Vengeance 5180 Gaming PC is a beautiful Micro-ATX machine that’s easy to upgrade but has a last-gen processor that isn’t as powerful as we would like.

Corsair makes so many of its own components that it’s surprising it hasn’t stuck them all in a computer before. With the Corsair Vengeance 5180 Gaming PC ($2,399, not available in the UK), it has finally used its own case, SSD, cooler, power supply and LED-lit mouse and keyboard in one PC. All of the parts are completely standard, including an Nvidia GeForce RTX 2080 by MSI, making for a PC you can buy now and easily upgrade on your own down the line. But with an 8th generation Intel Core i7-8700, the CPU is older than what some competitors offer out of the box.

With a set of parts you can almost completely buy off the shelf, Corsair has put together a beautiful gaming desktop out of black plastic, metal and some tempered glass. The case is the company’s own Micro-ATX Crystal Series 280X RGB. It’s a dual-chamber design with glass on one side and plastic and aluminum on the other.

The glass side shows off the majority of the internals, including the motherboard, GPU, RAM and closed-loop CPU cooler with RGB-lit 120mm fans. The front features two RGB-lit 140mm fans. Basically, it’s one big RGB party, and there’s even an additional light strip inside to add a bit more color. The all-black side hides the cable management and storage drives.

The main glass panel reads "VENGEANCE" with the subtitle “The gaming PC from Corsair.” It’s the major difference you’ll notice between this pre-built system and the case on its own.

Because this machine doesn’t use custom parts, it’s one of the most upgradable pre-built systems we’ve ever seen. And you don’t need any tools either. All of the screws are hand screws, and while some are pretty tight, I managed to get them out with just my fingers. Most of the components are beneath the tempered glass, while the storage and power supply are in the opaque chamber.

The Vengeance comes armed with MSI’s Vestus version of the Nvidia GeForce RTX 2080, packed with 8GB of VRAM. When I played Blackout mode in Call of Duty: Black Ops 4 at 4K resolution with all of the graphics settings maxed out, it ran between 48 and 61 frames per second (fps) with occasional stuttering as I fought my way out of the Hydro Dam. When I knocked it down to 1080p resolution (FHD), the game played between 141 and 165 fps, with one unexpected drop to 108 fps.

On the Rise of the Tomb Raider benchmark, the Vengeance reached 91 fps at 1920 x 1080 on very high settings but only 28 fps at 4K. The FHD desktop average is 70, while at 4K its a higher 37. On both versions the Vengeance was faster than the GL12CX, but it was a touch slower than the Trident X when it came to 4K. The GL12CX and Trident X also use RTX 2080 GPUs.

Grand Theft Auto V proved playable at 4K (very high settings) at 33 fps, again beating the GL12CX but falling below the Trident. At 1080p, it ran at 101 fps, one frame behind Asus’ desktop and three behind MSI’s. All three ran above the 76-fps average.

Corsair’s PC ran Hitman (1920x1080, ultra settings) at 136 fps, falling ever so slightly behind its two competitors (but still above average). At 4K, it ran at 78 fps, tying the Trident and edging out the Strix.

Like the GL12CX and the Trident X, the Vengeance earned a perfect score of 11 on the SteamVR performance test. The gaming desktop average is 9.6.

On our stress test, in which we run Metro: Last Light 10 times in a row, it achieved an average frame rate of 107.7 fps. It started with a first run average of 104 fps, finding a baseline around 110 fps for most of the subsequent runs and returning to 104 fps for the final run. The CPU ran at an average of 4.2 GHz and 57.4 degrees Celsius (135.3 degrees Fahrenheit). The GPU ran at an average clock speed of 1.8 GHz and 67.8 degrees Celsius (154 degrees Fahrenheit).

With a liquid-cooled Intel Core i7-8700, 16GB of RAM, a 480GB M.2 NVMe SSD and 2TB, 3.5-inch, 7,200-rpm SATA HDD, the Corsair Vengeance is more than enough for simple workloads, like web browsing, word processing and even some photo editing. But competitors use more powerful 9th generation Core Intel CPUs, so the Vengeance had a rocky time with our performance benchmarks in comparison.

The Vengeance took 12 seconds to copy 4.97GB of files, which translates to 424MBps. That ties the Trident X but surpasses the average of 370.7MBps. The GL12CX, at a blazing 757MBps, was quicker.

On our Excel macro test, the Vengeance paired 65,000 names in 33 seconds. That’s one second ahead of the 34-second average, but slower than both the GL12CX and the Trident.

It took 9 minutes and 7 seconds for the Vengeance to complete our Handbrake test, which transcodes 4K video to 1080p. The Vengeance and Trident X were both far faster with 9th gen CPUs.

Neither of these are amazing, but they’re still better than the average pack-in. The mouse has rubbery grips, four buttons, a click wheel and another button just for adjusting DPI. The keyboard has membrane rubber dome switches, dedicated media keys and six customizable macro buttons. Both peripherals support RGB lighting through Corsair’s iCue software.

Corsair’s software load is quite sparse. Our review unit came with iCue for managing the copious amount of RGB hardware included and Corsair Diagnostics, which runs system scans.

However, you still get all of the bloat that comes with every build of Windows 10, like Hidden City: Hidden Object Adventure, Drawboard PDF and not one but two different versions of Candy Crush.

Corsair sells the Vengeance 5180 Gaming PC with a two-year warranty.

The only configuration of the Vengeance is the $2,399 unit I’m reviewing here. But I had one curiosity about the machine I couldn’t shake: since all of these pieces are standard, not proprietary, would it be cheaper just to build the PC?

Component prices are constantly shifting, but while reviewing the Vengeance, I put together a parts list in PCPartPicker and came up with a base total of $2,164.74 (that includes a $95 Windows license, which, as we know, can be found for lesser prices). It also includes the keyboard, mouse and USB Wi-Fi adapter.

So it is, indeed, slightly cheaper to build, but those who want someone else to put it together aren’t paying a massive premium to have it assembled for them.

If you’re looking for a premium gaming desktop, the Corsair Vengeance is a strong option. While its GPU offers powerful gaming performance now, the standardized parts make it easy to upgrade whenever you want. No weird custom motherboards here.

There are a few cases, however, where the MSI Trident X wins. For $100 more, you can get a Core i9-9900K, which beats the Corsair's last-gen Intel Core i7-8700. That makes the MSI a better deal for the money. MSI also offers a mid-tower size case if you prefer something that size. However, while the MSI also offers standardized parts, it has a harder chassis to work in than the Corsair.

But if you want a pre-built system that you can eventually make your own, all backed by a two-year warranty and plenty of RGB, the Vengeance is all you need. It’s just not the best value out there.