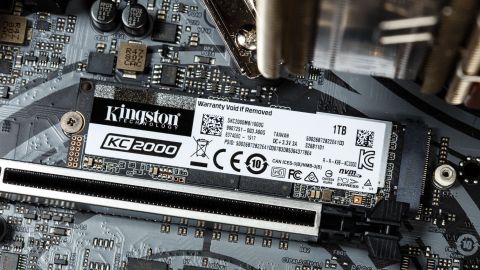 We put Kingston’s KC2000 up against a few well-known competitors that come armed with 3D flash. On the low-end, we have a SATA Crucial MX500, and as a step up the ladder, the entry-level NVMe Intel SSD 660p with QLC flash. We also included the value-centric MyDigitalSSD BPX Pro and Adata XPG SX8200 Pro. We also threw in the new WD Black SN750, Samsung 970 Pro, and the 970 EVO Plus, which also happens to have Samsung’s latest 9x-Layer flash.

The KC2000 did very well in PCMark 8, basically tying the Samsung 970 EVO Plus. The KC2000 ranked in fifth place overall.

Kingston’s KC2000 also performed well in our game load benchmark. With a total load time of 19.73 seconds, it beat all the flash-based competitors on our chart. It even outmatched the ADATA SX8200 Pro SSD that was faster in PCMark 8.

During the reading portion of the test, the KC2000 ranked a bit lower than the rest, but it was still faster than the Intel SSD 660p, MX500, and of course, a plain old HDD.

While its overall stats weren’t as high as some of the other drives we've tested, Kingston’s KC2000 continued to impress. SYSmark installed to the KC2000 faster than the Intel Optane 905P and any other competitor. And, although the KC2000's final test score in SYSmark didn’t outrank all the drives, it did outperform the WD Black SN750, MyDigitalSSD BPX Pro, and our low-end competitors.

The Kingston KC2000’s peak read and write speeds were a bit behind its high-end competitors, but still very good. It outperformed the Crucial MX500 and Intel 660p with ease as it peaked at 3.2/2.2 GB/s of sequential read/write throughput.

The Kingston KC2000 delivered pretty impressive write performance as it wrote 157GB of data at 2.3 GB/s. Performance degraded to 1,440 MB/s, and then 1360 MB/s, during the next 500GB of the workload. Finally, in its last stage of degradation, the KC2000’s write performance fell to an average of 730 MB/s for the remainder of the test. This ranked just ahead of the SX8200 Pro and BPX Pro.

The KC2000 had the second-worst idle power consumption when we disabled ASPM. However, it's 10mW of consumption tied for best when we enabled the feature.