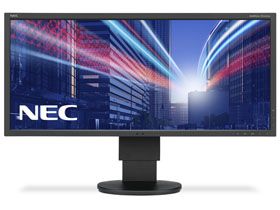 With the 2012 introduction of LG’s 29EA93-P, desktop users were introduced to a new aspect ratio option: 21:9, or in cinematic terms, 2.39:1. This year, other manufacturers are following suit with their own versions of LG’s panel, which, to refresh your memory, employs AH-IPS technology. A couple of months ago, we published AOC Q2963PM Monitor Review: 2560x1080 Is A New Way To Play, and found the AOC to be a great performer. Its utility is situational. In some tasks, the display configuration comes in very useful. In others, it gets a little awkward.

Dell, Asus, and NEC now have their own 21:9 offerings; NEC's EA294WMi is the subject of today's evaluation.

The company considers its EA294WMi a high-end offering and prices the display at almost $750. The next most-expensive model is none other than LG’s 29EB93-P at $629. While it is based on the same panel, the similarities end there. NEC not only offers excellent build quality, but also a host of features not found in most screens. For the IT professional, there are tools to manage all of the monitors on a network (not just this one, but anything made by NEC). ControlSync makes it possible to connect up to six EA3- and 4-series screens so they can share settings automatically. And if you're really concerned about power consumption, every energy-related setting on the EA294WMi quantifies your savings. The OSD can even translate that information into currency and carbon footprint data.

Aside from its obvious utility in entertainment applications, we remain curious about this aspect ratio's most viable use cases. To that end, we spoke to Art Marshall of NEC Display about the company's goals for the EA294WMi, and learned that many financial workstations consist of two 19-inch screens set up to display news and stock info. With the extra desktop real estate from a 21:9 display, it's possible to replicate that view with just one panel. There are similar applications in the science and medical fields, where systems might need to display content from multiple sources (like a PC and a scanning machine, for example). By enabling the picture-by-picture capability, you can connect two inputs for bezel-free viewing of both.

In looking over the EA294WMi's specs, maximum flexibility comes to mind. After all, the monitor boasts six video inputs plus audio, headphone output, and four USB ports. It’s hard to contrive a configuration that couldn't be handled. Unlike AOC's version, this panel includes a portrait mode. Though it's an expensive idea, the idea of having three or four of these side by side in portrait mode is undeniably cool. Also, browsing through the OSD, we can’t help but notice things like the four user-configurable color temp memories, and the DICOM Simulation mode that mimics the color and gamma settings of medical imaging equipment. There is no question that this is professional-grade gear. While enthusiasts are well-served by this display, there are many other applications that benefit, too.

We realize that most people will choose this monitor for its aspect ratio, and not necessarily its video performance. We still hold it to the same standards as other displays, though. Given the excellent performance we saw from AOC's Q2963PM, there is no reason to expect anything less from NEC's EA294WMi.

Next Page Packaging, Physical Layout, And Accessories
29 Comments Comment from the forums
Be In the Know