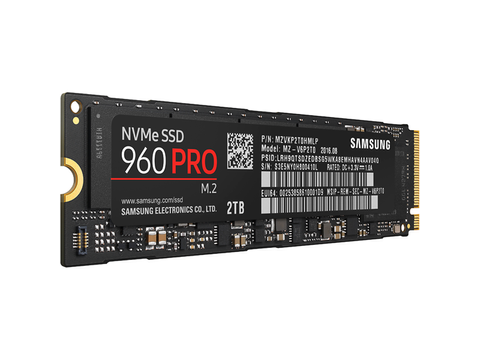 The Samsung 960 Pro M.2 NVMe SSD is here, but I'm not ready to have a party just yet. Unfortunately, the Pro series has moved out of reach for most users. The SATA Pro and new 960 Pro NVMe SSDs are expensive, and it appears that the gap between mainstream and premium SSD products is growing every day. We removed the 850 Pro and SanDisk Extreme Pro from our latest Best SSDs article update due to their high price point. The new high-end for consumers is the EVO series, and that product line still costs significantly more than the competing entry-level drives on the market.

That leaves the Samsung 960 Pro with little appeal for enthusiasts and power users. Samsung has delivered a product with so much advanced technology and performance over competing products that it has become a professional series, and it has the price to match. Users shouldn't buy the 960 Pro for gaming, although the large 2TB capacity would hold all (or a good portion) of your Steam library. If you get paid for running professional applications with Adobe, Sony Vegas, or other heavy workloads, then the 960 Pro's price becomes much less of an issue.

For most users, the forthcoming 960 EVO will be a better product. It should deliver the same real-world application performance for consumer workloads, and the pricing will be significantly better. Samsung announced both the 960 Pro and EVO at the same event, but the 960 Pro is in our hands, and the 960 EVO is currently just a paper launch.

We are still not sure what to think about the full-disk encryption scheme Samsung has with the new 960 series. The drive features full disk hardware encryption with 256-bit AES, but it only supports TCG Opal at launch. TCG Opal is only effective with third-party add-on software that you have to buy separately. We have a document from Samsung that states, "IEEE1667 is under consideration." IEEE1667 is also known as eDrive, which is Microsoft's trademark for its widespread encryption technology that ships with many of its operating systems. eDrive is more prevalent and accessible for our readers, and for products sold as upgrade components.

We don't want to take away from what Samsung achieved with the 960 Pro. Over the years, we've talked about the importance of vertical integration, and Samsung put on a clinic showing why it's important to have control of DRAM, NAND, and controller technology. Samsung is the only company that makes all three of these key components in house. Micron is close with DRAM and NAND, and it even has some acquired controller technology from the Tidal Systems deal, but we've yet to see anything as a result.

Samsung really proved that it doesn't matter if you have the tools, it's how you put them together to make a finished product. The 960 Pro represents SSD mastery with the best components available sewn together by steady hands. We shouldn't be surprised; Samsung has held a technology and product advantage with the Pro series since 2012. I wouldn't hold my breath for a competitor to achieve equal footing any time soon.

Prev Page Comparisons And Benchmarks
34 Comments Comment from the forums