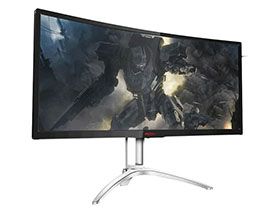 After our experience with AOC’s OSD joystick on the C400VU8, we had high expectations for the one found on the AG352UCG. Unfortunately, a different design team must have been involved because it isn’t nearly as intuitive. It is the only means of controlling the menu and doubles as a power toggle. That’s an annoying issue because when you press the stick, it turns the power off. There is no OK function. It took us a little time to acclimate and we think there is room for improvement. Press it to turn on the power. Click if fore and aft to control the volume. A left-click selects the video source, and right-click opens the menu. Once the OSD appears, fore and aft correspond to up and down. Right selects and left cancels. Just don’t press it by mistake or you’ll shut the screen off.

Rather than AOC’s usual strip across the bottom of the screen, there is a more traditional rectangle that you can place anywhere. We chose the lower-left corner. Options are few, and the first thing you’ll notice is there is no ULMB feature. We don’t consider this a deal-breaker, because we’d rather use G-Sync, and it’s not the only monitor we’ve seen to omit blur-reduction.

The Luminance menu has the usual brightness and contrast sliders plus a shadow control for low-end gamma. Increasing it helps with dark detail visibility, but we had no need for it. The AG352UCG’s VA panel has no trouble rendering fine shadow detail. You also get three gamma presets, and the first corresponds to 2.2. Four overdrive options are offered, and we found medium to provide the best performance with almost no ghosting. Game Mode has four image presets that alter color and gamma, but we found the best quality in the Off position. We’ll show you how to use the color temp options for best results.

In the color menu, you’ll find a low blue light slider along with four white balance presets. Warm is the default and sRGB is offered, but the best mode is User. It tightens up gamma tracking to perfection and doesn’t really need further adjustment, although you can tweak the RGB sliders for a little better result. We’ll show you that as well.

The OSD is available in 16 languages, can remain on the screen for up to two minutes, and has adjustable position and transparency. If you need a break reminder, a 10-second notice can be set to appear every hour.

The Extra menu has a factory reset, sleep mode (after 15 minutes of no-signal), USB charge (when the screen is in standby), LED color, and LED intensity. Those last two refer to the light bars on the bottom edge and back of the panel. They can light up red, green, or blue and have three brightness levels.

By default, the AG352UCG’s Game Mode is off and its color temp set to Warm. This provides an reasonably accurate image, but we observed some clipping in the brightest content. Rather than turn the contrast down, we found that simply selecting the User color temp fixed the problem and kept color close to standard. Further adjustment of the RGB sliders lowered the errors even more. This panel provides a vivid and saturated image with accurate color and excellent contrast, and requires very little tweaking. Here are our recommended settings.