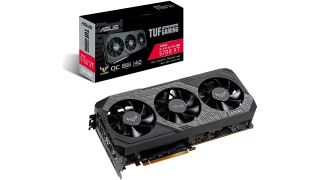 Say hello to the cheapest AMD Radeon 5700 XT graphics card we've seen to date. We give you the snappily monikered ASUS TUF Gaming X3 Radeon RX 5700 XT OC Edition 8GB, yours for just £340 and hot from the factory with an overclocked GPU.

Price wise, this card has sold for as much as £480 on Amazon last September and still commands as much as £430 from some leading retailers. So the current Amazon deal looks pretty hot.

Up front and centre, this card has a base clock bumped from the reference board's 1,605MHz to  1,730Hz. The card's maximum Boost clock, meanwhile, is up more marginally from 1,905MHz to 1,980MHz. The 8GB of GDDR6 memory remains at 14Gbps. Still, that's enough for very nearly half a TB per second of bandwidth.

All told, it's a very strong package for 1440p gaming - in other words, 2,560 by 1,440 pixels. This board will also turn its hand pretty nicely to superwide 3,440 by 1,440 gaming, though you'll want something a little quicker for full-on 4K gaming (check out our GPU hierarchy for more info). You can read our full review of the Radeon RX 5700 XT here.

ASUS TUF Gaming X3 Radeon RX 5700 XT OC Edition 8GB:
Was £480 now £340
For a card that once sold for as much as £480 and still commands as much as £430 at some major etailers, this deal looks like a steal. It's the cheapest 5700 XT on Amazon, too, despite being a well-specified factory overclocked model. Nice.

Of course, as an AMD Radeon board, you don't get hardware ray-tracing support. Until AMD revises its RDNA graphics architecture later this year, that feature is exclusive to Nvidia RTX GPUs such as the RTX 2070 Super, or the 2080 Ti. But then ray tracing in actual games is currently very limited.

What you do get is a very slick and quick card for conventional raster-based in-game graphics and a well featured board. Highlights include a beefy 2.7x width cooler with triple fans, the latter lubed up with space-grade lubricant sealed to IP5X dust-resistant standards, and all the usual refinements that come with every AMD Radeon 5700 XT board, including 2,560  stream processors, 160 texture units, 64 output units and a GPU based on the latest 7nm manufacturing technology.

If the Radeon 5700 XT isn't quite doing it for you, check our guide to the best graphics cards for 2020. There's something for just about everyone and every budget.