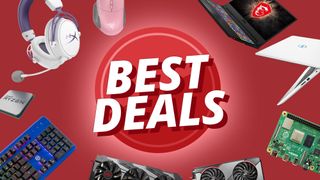 Even if it's not a holiday, there are great deals on PC hardware all year round and we're here to find them. That's why Tom's Hardware scours the web every day for the best sales on components (CPUs, SSDs, RAM, GPUs), peripherals (monitors, keyboads, mice) and prebuilt PCs (laptops and desktops).

Below, we've listed our favorite tech deals right now, along with some tips you can use to identify deals on your own.

We've checked these deals to make sure they offer solid savings. But whenever you're shopping, keep in mind:

Logitech MK270 Wireless Keyboard and Mouse: was $30, now $19 @Walmart
This keyboard and mouse combo uses 2.4 GHz WiFi to operate wirelessly. Both devices use the same USB receiver. The mouse uses a laser sensor. You will need one AA battery and two AAA batteries to power these.View Deal

Razer Mamba Wireless Gaming Mouse: was $99, now $45 @Walmart
This wireless gaming mouse from Razer is available for $45 through Walmart. It has an expected battery life of 50 hours and features 7 programmable buttons. This model has Chroma RGB LEDs.View Deal

Anker Wireless Ergonomic Mouse: was $45, now $19 @Amazon
If you're a fan of ergonomic peripherals, check out this mouse on Amazon. It has an upright design and a total of 5 buttons. This model has a maximum DPI of 1600. It's wireless, using a USB receiver to connect.View Deal

Seagate FireCuda 2 TB SSHD: was $94, now $74 @Amazon
This is a 2 TB hybrid drive from Seagate. It has a 2.5" form factor, designed for gaming on both PCs and laptops. It has transfer rates up to 140 Mbps.View Deal

Seagate Exos X16 16TB HDD: was $639, now $424 @Newegg
Get up to 16 TB of storage on this internal hard drive from Seagate. The Exos X12 Series uses Seagate Secure encryption technology. This model has speeds up to 7200 RPM.View Deal

MSI MPG X570 Gaming Edge Motherboard: was $209, now $189 @Newegg
Use the included mail-in rebate card to get this deal. This motherboard has an AM4 socket type to support 2nd and 3rd gen AMD Ryzen processors. It has built-in WiFi support and pre-installed IO shielding.View Deal

B450 Aorus M Motherboard: was $430, now $258 @Newegg
This Micro-ATX motherboard from Aorus is currently on Newegg for 40% off. It features an AM4 socket and supports up to four sticks of DDR4. It has an integrated graphics processor with both a DVI-D and an HDMI port.View Deal

MSI GeForce RTX 2060 Graphics Card: was $329, now $299 @Newegg
This graphics card is available for $299 when using the included rebate card and promo code EMCDFGP35. It has 6 GB of GDDR6 and can reach boosted speeds up to 1710 MHz. It features an HDMI port and three DisplayPort inputs.View Deal

ASUS ROG Strix GeForce RTX 2080Ti GPU: was $1299, now $1224 @Amazon
This GPU from ASUS can reach speeds up to 1665 MHz. It's VR ready and can support a total of 4 display outputs. It works with Aura Sync to adjust and control the RGB LEDs.View Deal

EVGA GeForce RTX 2060 SC Gaming GPU: was $359, now $309 @Newegg
This graphics card is available on Newegg for $309 after using the included $30 rebate card plus promo code VGAPCJP929. This model has only one fan for cooling and comes with 6GB of GDDR6. This package also includes a copy of Deliver Us To The Moon.View Deal

ZOTAC GeForce GTX 1060 GPU: was $229, now $209 @Newegg
This graphics card from Zotac comes with 6GB of GDDR5X. It has a normal operating speed of 1506 MHz and a boosted speed of 1708 MHz. This model features Nvidia Pascal Architecture.View Deal

Acer Nitro VG240Y Gaming Monitor: was $179, now $109 @Newegg
Looking for a quality gaming monitor that won't break your wallet? This monitor from Acer has a full HD resolution (1920 x 1080) and a refresh rate of 75 Hz. It features multiple display inputs—including two HDMI ports and a VGA input.View Deal

AOC C24G1 24" Curved Frameless Gaming Monitor: was $179, now $144 @Amazon
Get 19% off this AOC monitor with this deal on Amazon. This screen is full HD supporting a resolution of 1080p. It has a refresh rate of 144 Hz. This package includes an adjustable stand.View Deal

Dell 27" LED Backlit LCD Monitor: was $179, now $149 @Amazon
This monitor from Dell is an IPS display, making it much easier to see the screen from different angles. It's an HD monitor, with a resolution of 1920 x 1080. The refresh rate is 60Hz.View Deal

Lenovo Smart Tab M10: was $149, now $100 @Amazon
If you're looking for an Android tablet, check out this deal from Lenovo on Amazon. This tablet has a 10.1" display, a quad-core processor, and 2 GB of RAM. It comes with 16 GB of internal memory and can support a microSD card up to 256GB in size.View Deal

Samsung Galaxy Tab A SM-T510 Tablet: was $357, now $292 @Newegg
This tablet from Samsung has a 10.1" screen. It comes with 3 GB of RAM and has up to 64 GB of internal storage. This model comes with Android Pie pre-loaded.View Deal

ASUS VivoBook S15 15.6" Laptop: was $699,now $499 @Newegg
The ASUS VivoBook S15 Laptop features an Intel Core i5 processor with speeds up to 3.9 GHz. It has 8 GB of DDR4 and a 256 GB internal SSD. Add a little extra security by using the built-in fingerprint sensor.View Deal

DIYPC Zondda-O Black ATX Mid Gaming Case: was $49, now $35 @eBay
This case features bright orange highlights in the case design. It has 7 total expansion slots and 3 USB ports (one USB 3.0). You can install up to three 120mm fans.View Deal

Rosewill ATX Mid Tower Gaming Case: was $149, now $99 @eBay
The Cullinan V500 case from Rosewill has a sleek design with bright red LEDs. It features a tempered-glass side panel. This model can house Micro-ATX, ATX, and Mini-ITX motherboards.View Deal

Microsoft Wireless BlueTrack Mouse: was $34, now $19 @BestBuy
This mouse from Microsoft is wireless, using BlueTrack technology to perform better on a variety of surfaces. It has three buttons and a scroll wheel. This model uses two AAA batteries and can last up to 1 year before they need to be replaced.View Deal

Samsung Galaxy Bluetooth Earbuds: was $129, now $108 @Walmart
If you've been holding out for a pair of wireless earbuds, now might be time to make a move. These wireless earbuds from Samsung are marked down to $108 through Walmart. They use Bluetooth to connect and include a wireless charging case.View Deal

Razer Huntsman Gaming Keyboard: was $149, now $89 @Amazon
The Razer Huntsman gaming keyboard features mechanical switches for ideal feedback when typing. There are RGB LEDs throughout the keyboard design. The black edition is currently listed on Amazon for 40% off.View Deal

Microsoft Ergonomic Keyboard: was $59, now $44 @BestBuy
This keyboard from Microsoft is ergonomic in design—complete with a wrist guard and split keyboard layout. This edition is wired with mechanical keys and a built-in numpad.View Deal

Logitech MK270 Wireless Keyboard and Mouse: was $30, now $19 @Walmart
This keyboard and mouse combo uses 2.4 GHz WiFi to operate wirelessly. Both devices use the same USB receiver. The mouse uses a laser sensor. You will need one AA battery and two AAA batteries to power these.View Deal

Razer Mamba Wireless Gaming Mouse: was $99, now $45 @Walmart
This wireless gaming mouse from Razer is available for $45 through Walmart. It has an expected battery life of 50 hours and features 7 programmable buttons. This model has Chroma RGB LEDs.View Deal

Rosewill RGB Fan 120mm: was $23, now $13 @eBay
This fan can reach a maximum speed of 1200 RPM. It measures 120mm across and has a low noise profile of 23.2 dBA. This line is compatible with other Rosewill RGB products. Check out the product page for more details.View Deal

NZXT Kraken X72 Liquid Cooler: was $199, now $169 @Newegg
This liquid cooler from NZXT comes with three 120mm fans. It uses a desktop/mobile app to monitor and the performance, temperature, and pump speed. It's currently listed on Newegg for 10% off.View Deal

Aigo Aurora RGB 120mm Fans 3-Pack: was $27, now $22 @eBay
This cooling fan kit from Aigo features three 120mm fans. Each fan is high performance with RGB LEDs that can be controlled using a remote control. They're currently listed on eBay for 20% off.View Deal

EVGA SuperNOVA 650W PSU: was $119, now $89 @Newegg
Get this deal on Newegg using the included $20 rebate card. It's 80+ Gold certified to ensure energy efficiency of 92% or higher. It's fully modular, ideal for cable management.View Deal

TP-Link AC750 WiFi Range Extender: was $34, now $22 @Amazon
Extend the boundaries of your wireless network with this WiFi Range Extender from TP-Link. It's compatible with both 2.4GHz and 5GHz networks. The unit connects directly to a wall outlet and has an ethernet port on the bottom.View Deal

Wavlink Mini WiFi Range Extender: was $89, now $22 @Newegg
Extend your wireless network with this Wavlink WiFi range extender. It supports both 2.4 GHz and 5GHz networks with speeds between 300 and 433 Mbps.View Deal

Elgato HD60 S Game Capture Card: was $179, now $134 @Amazon
This capture card makes it possible to stream and record content from consoles to your PC. It connects using USB 3.0 and HDMI. It's currently available on Amazon for 25% off.View Deal

Logitech Wireless G935 Headset: was $169, now $129 @BestBuy
This wireless headset from Logitech has a battery life expectancy of 12 hours. It has 2.4 GHz wireless support and also includes a 3.5mm audio cable for a wired experience.View Deal

Dell USB DVD Drive: was $59, now $33 @Amazon
This USB DVD drive is an excellent option for anyone who needs a DVD drive sometimes, but not all of the time. It can both read and burn discs. It's currently marked down over 35% on Amazon.View Deal

Turtle Beach Recon 50X Gaming Headset: was $39, now $29 @Walmart
This headset is compatible with most devices—including PCs and consoles. It features stereo sound with a 40mm speaker. The microphone is omnidirectional and removable.View Deal

Logitech G233 Wired Gaming Headset: was $79, now $24 @Walmart
This Logitech headset is wired, using a USB connection. It weighs just 9.14oz, making it easy to wear for longer periods of time. The microphone boom is detachable with a micro pop filter.View Deal