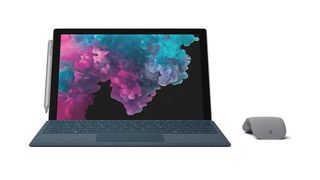 Relentless, merciless progress is pretty much the hallmark of consumer technology. But the victims of the product cycle can sometimes make for startlingly good deals. Like this Microsoft Surface Pro 6. At launch back in late 2018, this particular configuration sold for £1,149. Now it's yours for a piffling £760. That's one hell of a deal.

So what do you get for your cash?  For starters, there's an Intel Core i5-8250U CPU. It's an older chip first seen in late 2017. But it's still a powerful processor for this type of device with four cores, HyperThreading support and a maximum Turbo frequency of 3.4GHz.

Next up is an 8GB and 256GB RAM and SSD combo. Neither will set your pants on fire. But both are definitely adequate for the sort of general computing tasks likely to be thrown at the Microsoft Surface Pro 6. You won't be running out of memory merely by opening a few browser tabs, that's for sure.

To that you can add all the usual Surface accoutrements. That includes its gorgeous build quality that's good enough even to give Apple a good scare. This particular model also gets a fantastic 12.3-inch Pixelsense display with 2,736 by 1,824 pixels and a claimed 13.5 hours of battery life on the go.

OK, let's be fair you won't usually get quite that much. But over 10 hours is realistic and means you're not losing out much compared to devices powered by Intel's latest 10th Gen processors. Our only beef with this model is the lack of USB Type-C connectivity. if you can life with that, this is a fabulous deal.

Still not to your fancy? After something with a bit more gaming grunt? Well you can check out our favourite gaming laptops of 2020 here.