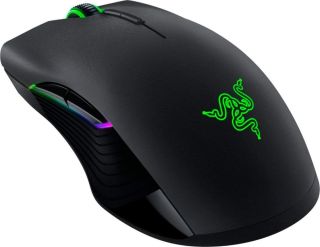 Finding a good ambidextrous mouse can be hard. It’s a bit of a niche audience, although it’s a style of mouse that typically caters to those lefties out there, a lot of right-handed folk appreciate a good ambidextrous design too (this journalist included). But when you take that niche further, and demand an exceptional quality, high-performance gaming mouse, well your options are limited.

When Razer’s Lancehead first launched it at last provided fans of the ambidextrous mouse design with a premium wireless experience complete with a myriad of programmable buttons, exceptional sensor, and intuitive and ergonomic design. Only problem? It was $140, no small sum. Today though, on this glorious Black Friday, Razer has dropped the price of its Lancehead Wireless by an incredible 52% on its Amazon listing, bringing it all the way down to a paltry $56. Yep.

The great thing about ambidextrous designs is that they really do cater to all styles of grip. In my case, I use a right handed palm grip, and it’s a perfect fit, my fingers fit comfortably on either side of the finger grips, and my pinkie doesn’t suffer any discomfort from doing so. Yet it's a mouse that'll easily support Claw and Fingertip too.

The overall finish is stunning, with a sandblasted plastic lining the top, it helps reduce the impact of greasy fingers, and sweaty palms and increases grip. The RGB lighting is admittedly quite refined, and limited, no doubt in part due to the wireless nature of the Lancehead, and overall button compliment is good as well, and easily accessible with both sides of your hand, regardless of whether you’re a leftie or a rightie. It does take time to train your pinkies to pick up those two additional buttons, but once you have access to them, you’re effectively left with a mouse designed around FPS, MOBAs and RTSs, and yet one that’s also capable of handling MMOs thanks to those two additional buttons.

On the whole Razer’s 5G Optical sensor feels sharp and precise. I certainly don’t use it beyond the 4500 CPI mark, however, for what it’s worth, below that CPI point feels fantastically accurate, and I’ve had zero tracking issues at all during my time using Razer mice with the 5G Optical sensor.

The only downside to report on is the fact there’s no included dock or support for something similar to on-the-go Qi charging, if you run out juice, you've got plug in the included USB cable and wait. It’s also weirdly not super heavy, but also not that light coming in at 111g. Admittedly that is still only 4g heavier than the Razer Basilisk deal that we featured earlier today and that was a wired mouse. Ultimately the Razer Lancehead is a fantastic ambidextrous wireless gaming mouse solution, and if you’re keen to do away with that pesky braided cable, you won’t be let down by any aspect of this thing.