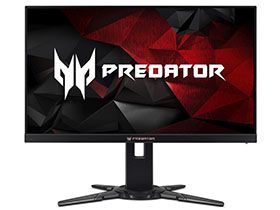 Gaming performance has pretty much come down to the relationship between the video card and the display. While CPUs, motherboards, RAM, and storage all play a part, it’s the graphics chip and the monitor that most directly affect the interaction between player and screen. Thanks to adaptive refresh technologies like G-Sync and FreeSync, coupled with high refresh rates, it is now possible to achieve maximum performance in all areas with a relatively modest investment. A GTX 1080 Ti coupled with a monitor like the Predator XB252Q is pretty hard to beat, for those who dislike compromise.

At its core, the Predator is a TN panel running at a native 240Hz. It achieves this without overclock, which means all buyers are assured of the highest possible refresh rate. It keeps input lag and response times at their lowest by using FHD resolution and a 6-bit+FRC configuration to further optimize bandwidth.

While these things may seem old-school, the resulting package is one of stunning image quality and seriously immersive gaming. We’ve reviewed plenty of higher-res screens that provide hours of entertainment, but the XB252Q offers just a little more. With G-Sync from 24-240Hz, you’ll never see a frame tear no matter what video card you use or what game you play. A truly usable ULMB feature gives users another option for enhancing motion quality. And a super bright panel means you won’t give up brightness when using the backlight strobe.

While this display is ideal for competitive gamers, and has no real equal in speed, there are still things we hope to see in the near future. More resolution is always welcome. To have the Predator’s feature list at the QHD level would be amazing. And even though we have no real issue with TN panels, VA and its much-higher contrast is what we really crave.

The XB252Q is clearly a “last one-percent” product that incorporates the latest in gaming technology. It’s priced at the premium level, but we suspect most devoted gamers will appreciate its performance regardless of cost. It’s much like the difference between a Corvette and a Porsche 911. Both will go fast, turn, and stop on a dime. But no one regrets paying extra for the Porsche.

If you’ve already spent a lot on a high-end gaming system, the XB252Q won’t destroy your budget. It offers incredible performance and a gaming experience that few other displays can match. It’s a little lacking in contrast and color accuracy, but those things take a back seat to its speed and responsiveness. For those reasons, we’re giving it our Tom’s Hardware Editor Recommended award.