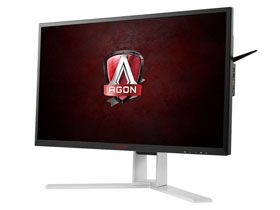 The AG271QX requires some tweaking for best results, but once you change a few settings, you’ll get to enjoy a nice image with some of the best motion processing we’ve seen from any FreeSync monitor currently available. A large operating range means it will work with a wide variety of video cards. Both budget and high-end systems can benefit from this versatile display. We think AOC’s new Agon line is starting off well, and we look forward to what the future brings.

Like Nissan with Infiniti and Toyota with Lexus, premium branding is a great way to build products that offer a little more than the rank and file. Asus has its Republic of Gamers line, and Acer offers the Predator series. Now AOC has jumped on the badging bandwagon with a new group of screens called Agon. These high-end gaming monitors offer better build quality and features sure to appeal to discriminating enthusiasts. Today we’re checking out a sweet looking 27" TN panel with QHD resolution, 144Hz refresh, and FreeSync: the AG271QX.

Deciding between adaptive refresh technologies comes down to just a few parameters: cost, where obviously FreeSync has the advantage; which video card you already have; and operating range, which is the one factor that truly separates Nvidia from AMD. Every G-Sync monitor, regardless of size, technology, or price, maintains adaptive refresh down to 30Hz. FreeSync panels, on the other hand, vary in this specification. In fact, most products bottom out at 40Hz, and some set the floor even higher. If you have a video card that can’t keep the action above 50 FPS, this is an important factor in your buying decision. AOC offers a few advantages in this area.

A couple of AOC's recently-reviewed screens feature operating ranges as low as 35Hz. The AG271QX goes down to 30Hz, making it very competitive with its G-Sync counterparts. At the other end, a 144Hz refresh rate is supported without requiring an overclock. In addition to this, you get a TN panel with QHD (2560x1440) resolution, lit by a white LED that runs flicker-free. Color depth is a native 8-bits without the use of FRC. There is a low input lag mode and a very effective overdrive too. Blur reduction is the only missing feature, though our past reviews have shown this to be a non-issue.

We have reviewed many AOC monitors favorably in the past and found among them some compelling choices for gamers. The new Agon line promises to bring an even better experience to the desktop for enthusiasts seeking the best gear with the highest performance. Will this freshman effort crush the competition? Let’s take a look.

The AG271QX ships in a stout carton with the contents enclosed in lots of molded foam. Unpacking reveals gorgeous metal stand components with cast aluminum used for the base and upright. Both parts are extremely well protected from scratches with soft wrapping materials. Assembly is a bit more involved than we’re used to. After mating the stand pieces with a captive bolt, you’ll have to break out a Phillips-head screwdriver and locate the four black bolts taped to the upright’s plastic wrap. There are four other smaller screws used to attach a wall-mount bracket adapter. You won’t need them unless you use your own hardware, so make sure to save them somewhere safe. The stand bolts are treated with blue Loctite, so you’ll have to apply some extra elbow grease to get them snugged up. Once everything’s put together, it presents a slick high-end look with solid mechanical movements.

The power supply is an oversized external brick. HDMI, DisplayPort, USB 3.0, and two audio cables are included. You also get a printed quick-start guide and the aforementioned bracket adapter. In a break with tradition there is no CD. You’ll have to download the user manual and desktop software from AOC’s website.

The Agon logo is clearly displayed on the front bezel, which is a little wider on the bottom than on the top and sides. There, it’s a slim 11mm, so you’ll have no trouble putting two or three AG271QXs on your desktop. Controls consist of small buttons along the right-bottom edge, but once you plug in the puck-style controller, you’ll only need to press the power toggle. The controller is very useful and contains everything you need for OSD navigation, input selection, and three user-programmable memories, which are accessed from the monitor’s game mode.

On the side panel are two USB 3.0 ports, one of which remains powered during standby for charging purposes. You also get a headphone output and a microphone input. Above these is a metal hook which can be folded out and used as a headphone hanger. Very nice! Visible on the upright are tick marks, which can be used to remember position settings by sliding a small plastic arrow to your preferred spot. If you look closely, there are tiny angle markings on the hinge indicating the degree of tilt. The solid-aluminum stand offers a full array of adjustments. You get just over 5" of height range plus 25° tilt and 20° swivel in each direction.

AOC’s logo is clearly displayed around back along with a large red bulge that tapers across from side to side. The stand bolts flush into this area for a one piece look. If you avail yourself of the 100mm VESA mount, you’ll have to attach the included adapter with its four screws. The upright’s top features a small carrying handle which is part of the larger casting. The entire package exudes quality, and it represents a step up from AOC’s usual products, which already offer decent builds.

The input panel is fully stocked with one HDMI 2.0 one HDMI 1.4/MHL, one DisplayPort, one DVI-D, and a VGA port. FreeSync works over DisplayPort and both HDMI inputs, but you’ll need to use the 2.0 version to get up to 144Hz. HDMI 1.4 only goes to 75Hz. All three support the 30Hz lower limit. There's an analog audio input and a microphone output plus the USB 3.0 upstream and two downstream ports.

Next Page OSD Setup & Calibration
20 Comments Comment from the forums