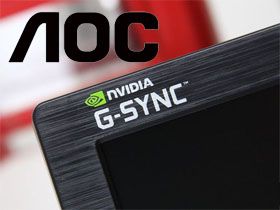 With G-Sync remaining a premium and expensive option, AOC's G2460PG represents the first value-oriented product in the genre. At about half the price of Asus' ROG Swift, you won’t give up much to either save some coin or put two monitors on your desktop.

The first G-Sync-capable monitors were announced nearly a year ago, but the technology is taking longer to find its way into shipping products than Nvidia led us to believe. First, we had the upgrade kit for owners of Asus' VG248QE. If you were willing to perform a bit of open-heart monitor surgery, you could install the small add-in board after spending an extra $200. That gave you the benefit of signal-rate matching, along with a native 144Hz refresh rate.

Asus followed up in August with its ROG Swift PG278Q. That monitor came out at a high-end price, and is still selling for as much as $1000 today. It not only has G-Sync and a 144Hz maximum refresh, but a built-in blur reduction feature in the form of a variable backlight strobe.

For gamers wanting a smaller and less-expensive solution, AOC is first to the table with the G2460PG. You may recall our recent review of the G2460PQU. Today’s subject is quite similar, adding only G-Sync and ULMB (blur-reduction) to a speedy TN panel capable of 144Hz.

Basically, choosing between the PG and PQU versions of AOC's G2460 comes down to what you can afford and the features you want. The PQU enables 144Hz. But if you want blur-reduction (ULMB) and G-Sync, you have to pony up another $200 or so. Otherwise, the panel technology they use is the same.

In the G2460PG, AOC starts with a 24-inch TN part from AU Optronics that is rated at 120Hz. We’re pretty sure it’s the same part that anchors the G2460PQU. AOC successfully overclocks both panels to 144Hz without requiring any driver modification by the user. Our press samples ran at full speed without issue even when we slammed them with graphically intensive titles like Watchdogs.

To keep the signal flowing smoothly, the native color depth is 6-bits with frame rate conversion added to create an 8-bit equivalent. If you’re concerned about banding, don't be. We checked out plenty of still and moving images, observing no artifacts. Modern video processing algorithms have pretty much eliminated that problem. If you see it on this monitor, it’s an issue with the content.

As with the ROG Swift, using G-Sync is simply a matter of having a GeForce GTX 650 Ti or better graphics board and the latest Nvidia driver. Any version newer than 340.52 will work. Checking two boxes in the Nvidia control panel turns the feature on. Then you can enjoy full-motion gaming without screen tears or judder.

AOC also follows Asus’ lead by including ULMB. We’ve seen some sort of blur reduction via backlight strobe in many of the fast-refresh monitors reviewed here. The first thing to be aware of is you can’t use ULMB and G-Sync at the same time. And you must operate at 120Hz or lower for blur-reduction. Once enabled, light output drops by at least 63 percent or more, depending on where you set the pulse width slider (more on that later).

We’ve been impressed with AOC’s build quality, video performance and value in other products. For those wanting to add G-Sync to their high-performance gaming rig, the G2460PG seems quite promising. Let’s take a look.

Next Page Packaging, Physical Layout And Accessories
Be In the Know