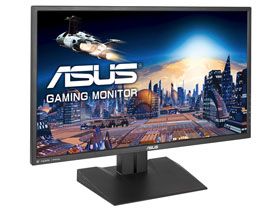 While we didn't find the 90Hz FreeSync limit to be a problem, we would rather see it implemented to the full 144Hz rate the monitor is capable of. Still, we had a hard time finding a fault with the MG279Q during gameplay or any other use for that matter. This is a high-quality IPS screen with superb color accuracy and contrast. In our book, it's a winner no matter what you use it for and it is a little less expensive than many business class QHD screens.

For many years, manufacturers have marketed certain displays as "gaming monitors" by endowing them with features like special image modes, overdrive and slick styling. But to truly appeal to gamers, one needs a refresh rate higher than 60Hz.

While plenty of CRT displays could be driven to faster rates, LCD panels were stuck at 60Hz until just a few years ago. Asus was the first to mass-market a 144Hz panel at 1080p resolution with its VG248QE, which we reviewed almost two years ago, and the monitor is still available for sale today.

Many imitators followed, having one thing in common: TN technology. While TN's 6-bit color depth and fast panel response made for a good gaming experience, users longed for the superior image quality and viewing angles of IPS screens. Now we're happy to report that the landscape has changed with QHD (2560x1440) offerings from two mainstream companies, Acer and Asus.

We've already covered Acer's superb XB270HU G-Sync screen. Today, we have a FreeSync version from Asus based on the same panel. Introducing, the MG279Q.

The core part is the same in both products and comes from AU Optronics; internally it's known as M270DAN02.3. It was first made available in 2014 and runs at 144Hz in its stock form. No further modification is required, which means it will run reliably all day long and every sample works at the peak refresh rate.

The panel offers 8-bit color depth and a white LED arrayed at the edges. Our tests of the Acer version revealed excellent color accuracy, high contrast and superb screen uniformity. It also displays great off-axis image quality thanks to Advanced Hyper Viewing Angle (AHVA) technology, which has already proved itself in the XB270HU.

The only functional difference between the two is the Asus monitor has chosen to employ AMD's FreeSync and therein lies an issue. Because of the chosen scalar chip, the MG279Q's fps-matching range is only 35-90Hz. Now before you throw up your hands in frustration, at least read about our gaming experiences on page seven. It's actually not a big deal in practice.

The other thing left out here is any sort of blur-reduction feature. Since you can't use ULMB at the same time as FreeSync or G-Sync, we don't think it's an issue. After testing many other screens that provide smooth motion, courtesy of their high framerates, we found we didn't use ULMB much at all. Besides, it reduces light output, sometimes significantly.

MORE: Display Calibration 201: The Science Behind Tuning Your Monitor
MORE: All Monitor ArticlesMORE: Displays on the Forums

Next Page Packaging, Physical Layout And Accessories
28 Comments Comment from the forums
Be In the Know