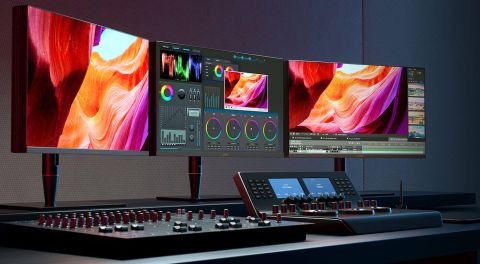 If accurate color and killer HDR are your goals, the Asus ProArt PA32UCX is as close to perfect as a display can get. With its near-full coverage of Rec.2020 and support for every kind of HDR, it’s a reference monitor that professionals will be glad to add to their toolkits.

Over the past two years, HDR and 4K/Ultra HD (UHD) displays have trickled down in price. Now commonplace, it’s almost impossible to buy a TV larger than 42 inches without some form of HDR with 4K and extended color. The same isn’t quite true for PC monitors, but many enthusiasts hunger for one of the best 4K monitors or TVs. Those shopping for a new high-res monitor have a few choices that mainly follow price lines. The best image quality costs the most money. And we’ve established that the very best HDR requires two things: high brightness and a full-array local-dimming (FALD) panel, which uses independently controlled lighting zones for better contrast and less light bleed than edge-lit displays. Fitting that bill are the HP Omen X 65 Emperium, Asus ROG Swift PG27UQ and Acer Predator X27, and no other screens have managed to equal their image quality -- until now. Meet the new reference 4K monitor: the Asus ProArt PA32UCX.

Unlike the aforementioned displays, PA32UCX isn’t a gaming monitor; it’s a reference-quality professional display that achieves image accuracy with something never seen before: a mini-LED backlight. Where typical LED diodes are around 0.6mm, mini-LEDs are half that size. That means you can pack a lot more of them into the same space. Still not quite on par with OLED, that mini-LED backlight features 1,152 dimming zones in a 48 x 24 array. The Asus, Acer and HP boast 384 zones, which is still enough to eliminate the halo effect that sometimes appears with local-dimming backlights. But more zones is better, and the PA32UCX proves that.

The the PA32UCX also has massive color capability. It's the first display we’ve reviewed to include a native Rec.2020 gamut. This is achieved with a quantum dot film, something that’s commonplace among wide-gamut displays today. But while most monitors’ coverage ends at around 85% of the DCI-P3 gamut, the Asus goes all the way to a claimed 95% of Rec.2020.

All this goodness doesn’t come cheap. The PA32UCX retails for $4,000. But when taken in comparison to other reference-level monitors, it isn’t hugely expensive. For instance, a Sony PVM-X550 55-inch OLED 4K monitor will set you back over $23,000. The PA32UCX offers color accuracy and preset modes for every color gamut in use today (sRGB, Rec.709, DCI-P3, Adobe RGB and Rec.2020). You even get DICOM, which is used in medical imaging. Every mode is factory-calibrated to within 1 Delta E (dE) for grayscale and color. And you can calibrate the modes using the on-screen display (OSD) or Asus ProArt software. There’s a lot to see here.

The PA32UCX is large and comes in an equally large carton with the base and upright already assembled. Together, the base and upright weigh more than most entire displays. The panel snaps on or you can use its 100mm VESA mount with aftermarket brackets and arms. The cable bundle includes one each of HDMI and DisplayPort, plus three USB-C/Thunderbolt wires. You also get a snap-on light hood and a cover for the input panel.

The PA32UCX is built like a tank. There is no mistaking its intended use as a professional tool. Styling is simple and elegant, with an all-metal cylindrical upright that tapers at the bottom. Combined with the base and panel, it weighs over 30 pounds. Adding the light hood turns it into a formidable package requiring a good amount of desktop space.

Controls consist of five buttons around the back right, plus a joystick and power toggle. You won’t need much besides the joystick because it can operate the OSD and all monitor functions. Ergonomic adjustments include 5.4 inches of height, 60 degree swivel in each direction, a 90 degree portrait mode and 23 degrees forward and 5 degree backward tilt. Everything moves with a solid premium feel. However, the panel’s weight means there’s a little wobble where it attaches to the upright.

The input panel is packed with three HDMI 2.0 ports and a single DisplayPort 1.2. We were surprised not to see DisplayPort 1.4 support, but the PA32UCX is focused on video and photo production, not gaming. Despite that, FreeSync is available over both DisplayPort and HDMI, and we discovered during testing, it’s G-Sync compatible, even though it’s not officially certified as so (here’s how to run G-Sync on a FreeSync monitor). Of course, input lag, response time and the 60Hz refresh rate will dissuade hardcore gamers craving speed. Additional ports include Thunderbolt 3 in and out, along with three USB 3.0 downstream connections. Once you’ve hooked everything up, you can hide the wires with a snap-on cover.

The OSD is massive but logically laid out into nine sections. In most cases though, you’ll only need to select a gamut mode and a brightness level. You also get every flavor of HDR support.

The picture modes correspond to the available gamuts. Every standard, from sRGB up to Rec.2020 and everything in between, (including DICOM for medical imaging equipment), is represented. There’s also a Standard mode, which corresponds to Rec.2020. For HDR10 signals, you can choose from DCI-P3 or Rec.2020, Hybrid Log Gamma (HLG, used in European and Japanese broadcasts) and Dolby Vision. Within these are luminance curve options (we’ll talk more about this on page five). Finally, there are two user modes you can set up however you wish with any combination of gamut, white point and gamma.

Each mode except sRGB allows for full calibration in the OSD. In addition to five gamma presets ranging from 1.8 to 2.6, you get two-point grayscale controls and hue/saturation sliders for all six colors. Another sub-menu offers sharpness overdrive (edge enhancement), aspect ratio options and uniformity compensation. You can also view two sources at once using PIP/PBP with independent color settings for each window.

The System Setup menu is where you’ll find Asus’ local dimming options, called Dynamic Dimming, for both SDR and HDR signals. Its three levels differ in speed only. We couldn’t see any difference in contrast between the settings. Fast provides the quickest changes between bright and dark content. You’ll want to turn this option on because it unlocks the PA32UCX’s full image quality potential.

We measured all the gamut modes, and they were all very accurate. All but sRGB can be calibrated, but calibration isn’t really necessary.

We adjusted the Rec.709 mode to test the PA32UCX’s capabilities. The controls were very precise, including the gamma presets that measure identically to their labeled values. Our only wish would be for more of them in 0.1 rather than 0.2 increments.

Our recommended settings for Rec.709 are below, but we expect owners of this monitor to perform their own calibration. You can do this in the OSD or with Asus ProArt software. If you buy the PA32UCX-K version of this monitor, it includes an i1 DisplayPro colorimeter.

Here are our recommended calibration settings:

The PA32UCX is a reference-level video monitor. With this in mind, we connected an OPPO UDP-203 4K Blu-ray player to test out its HDR performance.

When playing more frenetic games like Call of Duty: WWII, it wasn’t easy to appreciate the sights and sounds of the virtual world. Sluggish control response made it difficult to stay alive for more than a few minutes at a time. If frag-fests are your favored method of relaxation, this monitor will disappoint. Stick to games that prioritize exploration and discovery over fast-paced action, and you’ll be able to enjoy the PA32UCX’s strengths while gaming.

We used the Spears & Munsil Ultra HD Benchmark, which contains 4K test patterns and demo material shot at 8K resolution (7680 x 4320) and mastered in HDR10 and Dolby Vision formats. Calling this footage state-of-the-art is an understatement. When viewed on a premium display, it’s jaw-dropping. I’ve watched this disc on a number of projectors and Vizio TVs, including the PX65-G1, where 384 dimming zones and nearly 80% Rec.2020 coverage left me impressed. But when compared to the image coming from the PA32UCX, the Vizio’s picture looks like it were drawn with crayons. It’s hard to describe something this sharp and 3D, (and there’s no way to illustrate it here), but it was the best video quality I've seen to date.

The Spears & Munsil disc offers the same footage in every HDR format, with varying peak brightness levels. This gave me a chance to try the PA32UCX’s different HDR settings. HDR10 looked best when I selected 2,000-nit content and set the monitor to PQ Optimize. This sets the tone-mapping to an optimal level for the displayed content. 2,000 nits comes closest to the PA32UCX’s 1,400-nit capability, so it was a nearly perfect match. Not only is contrast and resolution beyond anything I’d seen before, color took on a whole new meaning.

Dolby Vision is available only on some consumer TVs, and the PA32UCX and Asus ProArt PQ22UC portable are the only PC monitors with Dolby Vision. Dolby Vision differs in that it tone-maps to each individual display rather than applying a generic map, which is contained in the content’s metadata. That way, it’s shown using the display’s full dynamic range. HDR10 is limited because it’s mastered to a fixed peak level, so it won’t look the same on every monitor. The PA32UCX lets you toggle between bright and dark settings to better suit different room light levels.

We watched the same content mastered in HDR10 and in Dolby Vision. There was no comparison: Dolby Vision was clearly superior, especially in its detail. Dark objects against bright white backgrounds had far more texture than with HDR10. Color seemed more saturated, even though the gamuts are the same between formats. The only bummer about Dolby Vision is that it’s harder to find content. The games Battlefield 1 and Mass Effect Andromeda support it, but you’ll need to play the console version on a compatible display to see it.

The PA32UCX isn’t a gaming monitor, but 60Hz, FreeSync and the ability to run G-Sync unofficially, means some creatives who are also casual gamers will want to boot up their titles on this pricey 4K display. In the response and lag department, the Asus was a bit sluggish. While it measured similarly to other 60Hz monitors, its control lag was inconsistent. Players spoiled by some of the best gaming monitors with 144Hz refresh rates will certainly be disappointed when the action gets intense. But if you want to spend some time exploring the game environment, prepare to be mesmerized.

Tomb Raider is a great title for looking around and immersing yourself in a virtual world. The PA32UCX’s picture quality was breathtaking in every environment. Rendered objects took on a reality that you won’t find anywhere else. The monitor’s dynamic contrast and zone dimming features made it look almost like a premium OLED or plasma display. Superb color saturation and accuracy enhanced the picture even more.