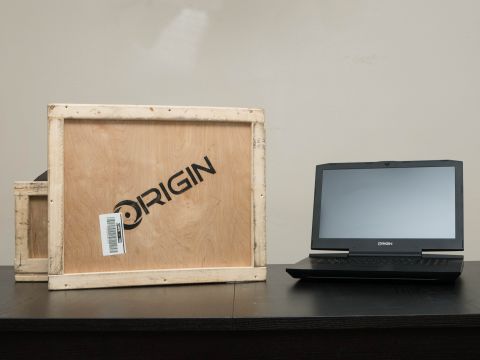 The Origin PC EON17-SLX is arguably the most powerful gaming laptop we’ve ever tested, besting even the Acer Predator 21 X in terms of raw specs. It features a desktop class 7th-generation Intel Core i7-7700K and two Nvidia GeForce GTX 1080s running in SLI. It contains 16GB of DDR4-2400 memory, a 512GB M.2 SSD, and a 2TB 5400RPM hybrid HDD for added storage. To put the desktop processor and dual GTX 1080 configuration to good use, the EON17-SLX features a 17.3” Ultra HD (3840x216) matte IPS display with G-Sync running at 60Hz.

The Acer Predator 21 X features the overclockable 7th-generation Intel Core i7-7820HK, which we've only seen in the MSI GT73VR Titan SLI 4K. It has two Nvidia GeForce GTX 1080s, making it a graphical powerhouse as far as laptops (if we can even use that word) go. It contains 64GB of DDR4-2400 memory, two 512GB M.2 SSDs running in RAID 0, and a 1TB 7200RPM HDD for added storage. But those qualifiers pale in comparison to the 21" Wide-FHD (2160x1080) matte IPS display with G-Sync running at 120Hz. In terms of gaming performance, this will the the EON17-SLX’s primary competitor.

Our lowest-end system in this comparison is the Eurocom Tornado F5, but it’s a formidable system. The Tornado F5 review hasn’t been published yet, so stay tuned! It matches the Origin PC with an i7-7700K, but only contains one GTX 1080. It also has 16GB of DDR4-2400 memory, a 250GB M.2 SSD, and a 1TB 7200RPM HDD for additional storage. The Tornado F5 only has a 15.6” Full HD (1920x1080) IPS display with a matte coating. While it doesn’t have the raw gaming performance of its competitors, it should go head to head with the EON17-SLX in platform-based synthetic tasks.

3DMark’s game-like workloads give us a sneak peak at what our gaming benchmarks might who. The Origin PC EON17-SLX stands far ahead of the competition. Graphics-wise, it stands toe-to-toe with the Acer Predator 21 X, but its desktop-class processor gives it the upper hand in Physics workloads and at higher resolutions. You’ll see similar CPU-based results with the Eurocom Tornado F5, which also has an i7-7700K CPU.

The 3DMark Physics tests foreshadowed the EON17-SLX’s Cinebench victory. The Origin and Eurocom laptops trade blows, with the Tornado F5 winning in single core rendering and the EON17-SLX firing back in multi-core rendering. The desktop-class processor grants the Origin a 5% edge in OpenGL shading compared with the Predator 21 X. The second GTX 1080 is essentially useless during the shading test, where the single-GPU Eurocom performs roughly the same as the Origin system.

We perform an IOmeter test on each laptop’s primary drive to measure basic random and sequential read and write speeds. The EON17-SLX contains a 512GB Samsung 960 Pro M.2 SSD, whereas the similarly configured Predator hosts double the storage capacity with two 512GB Toshiba OCZ RD400 M.2 SSDs. The MSI’s Super RAID configuration is composed of two 256GB Samsung SM951s, matching the Origin’s capacity. The Eurocom has the smallest storage configuration out of the bunch, with a 250GB Samsung 960 EVO.

The EON17-SLX delivered the slowest random 4K read speeds out of the bunch, but the highest write speeds. Meanwhile, it outperforms the competition in 128K sequential read speeds and narrowly loses to the two RAID configurations in sequential write speeds.

To approximate a system’s common workday performance, we use PCMark 8’s Microsoft Office and Adobe Creative tests. These platform-based tasks benefit greatly from CPU performance, so the Tornado F5 scores well because of its desktop Core i7 CPU. However, adding another GTX 1080 to the mix boosts the EON17-SLX to first place. Meanwhile, both i7-7820HK-equipped laptops falter, especially during the Adobe Creative test.