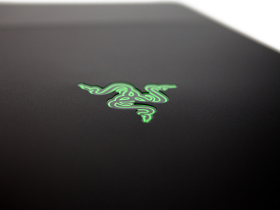 Notebook designers talk about the “Z” (axis) when they refer to the designed thickness of a machine or components inside. The lower the Z, the tougher it is to add complexity and dispel heat. Hence, most gaming notebooks are on the thicker side, since they need the room for large heat sinks and fans. A thermal solution capable of removing the 150+ watts of heat that a high-end gaming system produces simply couldn’t fit inside a MacBook Air. High heat can lead to several unwanted effects. It can shorten the life of batteries and traditional hard drives. Heat can also make a machine uncomfortable to use. In a notebook with a Z as low as Razer's Blade, getting components to fit in, while also getting heat out, becomes the major challenge.

Razer’s motto is “For Gamers. By Gamers”, and it started catering to that demographic in the 90s. Initially, Razer focused on high-end gaming mice to help enthusiasts get the most performance possible by staying on the cutting edge of technology, functionality, and ergonomics. Over the past decade, though, we've seen the company expand its portfolio to include keyboards, headsets, console controllers, and even gaming laptops.

When Razer expanded its line-up with the original Blade, it was a major departure from most gaming notebooks that came before. Razer designed the Blade to generate as much performance as possible in a portable machine, yet it still incorporated a large 17” screen. The company eschewed the bulk and heft of laptop frames commonly used in other 17” gaming machines in favor of a thinner, sculpted body that reduced overall weight. Instead of a large OEM power adapter, Razer created its own, which was lighter and smaller. Instead of a typical trackpad, it included a small touchscreen running the Switchblade UI and ten customizable keys.

The original Razer Blade (released at the tail end of 2011) dealt with thermal challenges by employing a dual-core processor and Nvidia's GeForce GT 555M, a combination that didn't require as much cooling as competing 17" gaming machine. Unfortunately, the match-up also caused the first-gen Blade to lag behind other notebooks in measures of absolute performance. The machine was capable of mid-range gaming, sure. But it was also slower than other systems selling at lower prices. Razer's Blade had the looks and the portability, but it lacked muscle. In the quest for a low Z, the performance trade-off was a little too severe.

The second-generation Blade, which we are reviewing today, represents a major effort to upgrade the machine's performance, while retaining the thinness and features that set the original apart. With a unique quad-core CPU that only dissipates up to 35 watts and a highly-overclocked GeForce GTX 660M, the new Blade should move up a couple of tiers in terms of speed. The cooling system is completely revamped to be more effective than the original, too. To save space, Wi-Fi and Bluetooth are covered by one card. In the end, the second-gen Blade should be what Razer's customers were hoping for all along: the right mix of looks, performance, and portability. Is this the one?

Next Page Design And Features
82 Comments Comment from the forums