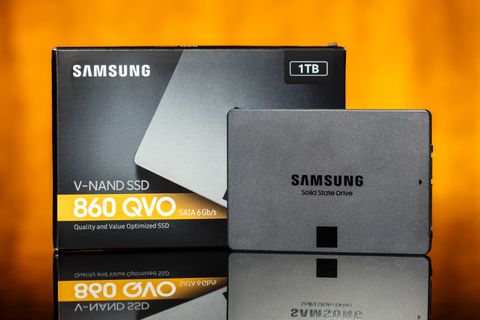 In today’s performance analysis we're including several popular SATA SSDs. These include the Crucial MX500, Toshiba OCZ TR200, WD Blue 3D, and the 860 QVO’s bigger brother, the Samsung 860 EVO. Additionally, we included the Intel 600p, which is the cheapest QLC-based NVMe SSD on the market (and provides very similar performance to Crucial's QLC P1 SSD). For our real-world tests, we also added results from a 960GB Intel Optane SSD 905P and a 2TB WD Blue HDD for reference between one of the best and slowest storage options in the market.

In our first test, Samsung’s 860 QVO ranks 5th overall with an average bandwidth of 219MB/s. This is not as good as the 860 EVO, but it is still a respectable result that outperforms many entry-level TLC SSDs, like the Toshiba OCZ TR200. Meanwhile, the MX500 and WD Blue are faster.

The Samsung 860 QVO ranked near the bottom of the group. The QVO is just two to three seconds slower than the rest of the mainstream competitors, but 11 seconds faster than an HDD.

The 860 QVO averaged 120MB/s during our real-world copy test, again landing near the bottom of the pile. It isn’t as fast as the other mainstream TLC SSDs here, but it easily outpaces the hard drive. It averaged 454 MB/s while reading our 6GB file, which is four times faster than the HDD but slightly slower than the rest of the test pool.

The Samsung 860 QVO installed SYSmark faster than any of the other SSDs. It even challenges Intel's Optane 905p, which is surprising. It looks like the new Intelligent TurboWrite algorithm is effective, but the drive scored just 1479 when we put it through its paces in the full-blown test suite. That's a good score, but it is slightly slower than the rest of the mainstream options.

The 860 QVO easily reaches its rated sequential specs of 550/520 MB/s of read/write throughput, which is on par with the rest of our SATA competitors. The Intel 660p towers over the competition with its much faster NVMe interface that allows for speeds of over 1.8 GB/s.

Samsung’s 860 QVO landed just behind the 860 EVO in this benchmark. The drive delivers average read performance, but it surpassed the 860 EVO and all other SATA SSDs during write testing, which helped propel it to third place overall.

Samsung’s 860 QVO achieved similar performance as the other SSDs in our test pool. We measured peak QD32 (Queue Depth) sequential read/write speeds of 562/532MB/s. The drive also provided similar read and write speeds compared to the 860 EVO at QD1, thus outranking the majority of the test pool.

While Intelligent TurboWrite allows for 520MB/s write speeds for up to 42GB of data, performance degrades drastically once the workload fills the buffer. The 860 QVO averages 80MB/s after Intelligent TurboWrite runs out. That's similar to both the TR200 and Intel 660p when the write traffic heads directly to the QLC flash.

At idle, the 860 QVO consumes the least amount of power in the group when power savings features are disabled. It draws under 30mW with the feature enabled, which is a very good result for a SATA SSD.

The 860 QVO consumes a bit more power than the 860 EVO under load. It averaged 1.9W during our 50GB copy transfer test and hit a maximum of 2.32W. While these numbers are respectable, a lower-than-average transfer rate of 120MB/s resulted in a poor efficiency rating with a score of 63MB/s per watt.