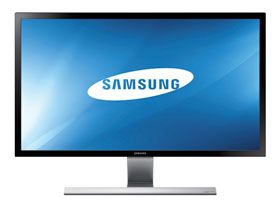 The U28D590D comes in one of the thinnest cartons we’ve ever seen. The box is literally only 4.25 inches thick and filled with just enough foam blocks to hold the panel in place. Mail order purchasers will want to carefully check their shipments for damage. Bundled accessories include HDMI and DisplayPort cables, plus an external power supply with detachable cord. There’s also a quick setup guide and a CD with the full manual and drivers.

Despite its low price point, the U28D590D sports pretty nice styling and decent build quality. The screen is no different than other 28-inch TN UHD displays with a medium anti-glare coating. The bezel is quite thin at only 12mm, and there are no buttons of any kind in view. All you can see besides the Samsung logo is a blue power LED, which comes on when the monitor is off. Yes, that sounds backwards, but you can change the light’s behavior in the menu so it’s on when the monitor is powered up.

The base is the definition of minimalism. It’s made of a nicely-finished plastic with stamped steel parts inside for rigidity. The monitor still wobbles a bit. Considering how thin it is, though, it’s pretty solid. The only adjustment available is tilt. The panel is at a good height for the typical desktop. However, if you need to change its position, you’re out of luck since there’s no VESA mount.

If you feel around back of the lower-right side, you’ll find the one and only control, this little joystick. It moves in four directions and functions as a button. Pressing it brings up a quick menu that presents a few basic functions or lets you into the main OSD. These kinds of controllers are appearing on more displays lately, and we’re beginning to like them. It’s much more intuitive than four or five buttons, and way better than touch-sensitive keys.

The U28D590D is incredibly slim from the side. The bulge on the panel’s lower half adds a little thickness, but it’s still a sleek package. The only missing interfaces are USB ports and a headphone jack. At least the latter connector can be found around back.

The back is finished in a finely-brushed texture that looks high-end. It’s super-clean too; all you see is the Samsung logo and a small input panel. There aren’t even any vents breaking up the surface. Despite that, the monitor runs cool to the touch.

You don’t get much more than what’s needed on the U28D590D’s input panel. There are two HDMI jacks and a single DisplayPort connector. To the right of those is a 3.5mm headphone output. The ports face out instead of down, but since you can’t wall-mount the panel, that doesn't matter.