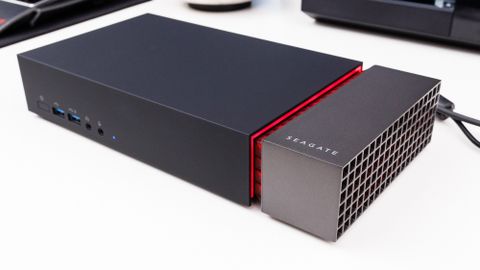 First, we tested out the Thunderbolt 3 port with some of the latest Thunderbolt 3 devices. Overall, performance looks to be a little lower than when connected directly to the host system’s Thunderbolt 3 port. With G-Technology’s mobile Pro, the Dock performed well. Up to 2.8/2.5 GBps read/write.

However, the Samsung X5 and LaCie’s Rugged SSD Pro both exhibited lower write performance when connected to the dock, even with write caching enabled, versus being directly connected to the host. The Seagate FireCuda 510 performs quite well in the M.2 slot, though, coming close in performance to the G-Technology Thunderbolt 3 SSD.

Random performance is similarly impacted as well--just a minor reduction in performance. With flash being as responsive as we have come to expect, a small percent change here doesn’t impact the overall usability of your devices all too much.

Next, when testing the other ports, we found them to perform quite well, no matter how many were used or how the dock was connected to the host. Here the internal HDD was also quite speedy, hitting 255/250 MBps read/write while the 1GbE RJ-45 port hit 113 MBps in either direction, too.

We did find the ASRock Thunderbolt 3 adapter on the host to be a little restrictive compared to the motherboard’s ASMedia USB 3.1 Gen2 link when it came to 10 Gbps device performance. So, results will depend on the device you use it with.