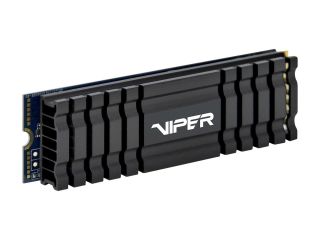 Unfortunately, this smoking deal is sold out, but head to our Cyber Monday Tech deals page for more deals.

In today’s modern era of solid state storage nothing is better than finding a super cheap M.2 PCIe SSD drive. Patriot’s 1TB VPN100 M.2 PCIe 3.0 NVMe SSD is on sale now (even before Black Friday) at just $120, that’s a $28 saving off of its recommended retail price or around 19% off. Go back in time 1-2 years and this thing would’ve cost three times as much.

It’s a mean bit of kit too, complete with a top-end Phison E12 NVme controller and coupled with Toshiba BiCS3 64L TLC flash chips. This thing rips up the rule book when it comes to affordable storage. With advertised sequential speeds topping out at 3,450 MB/s read, and 3,000 MB/s write, it’s certainly no slouch in the file transfer department. In fact in our own testing we found this drive to be more than capable of keeping up and in some tests even surpassing a few of the best SSDs we’ve tested this year, such as the likes of both Samsung’s 970 Evo Plus 1TB and the 970 Pro. Check out our full review of the Patriot VPN100 1TB here.

As for the heatsink? Well rest-assured we found that although it’s a substantial bit of kit, when mounted into an onboard M.2 slot it doesn’t conflict with any GPUs or anything along those lines. The only downside to it (and the positives far outweigh this), being that although it makes contact with the NAND flash on the PCB, there is a gap between it and the controller, a component you typically want to keep cool for best performance, that said controller temps never rose above more than 40 C, which is absolutely fine for everyday use.

Don't worry if this isn't quite the right drive for you, we’ll have more Black Friday SSD deals as the holiday sales continue.